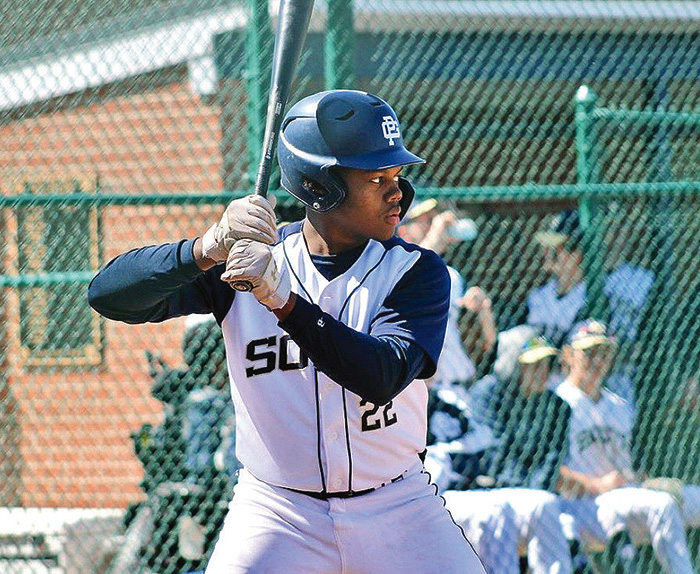 Courtesy picture
This spring, Jonathan Drake became the first player in southern baseball history to be honored as MAC Red’s Most Valuable Player.

For a program as historically successful as the Grosse Pointe Sud baseball team, it is difficult to come across many “firsts” for the program.
With state championships, league championships and more on its way, the Blue Devils baseball program recently achieved two milestones it had never had before: the first came in the form of a team distinction, when South finished as the only regular season champion in the MAC Red; the second came when senior Jonathan Drake became the first player in Southern baseball history to be named MAC Red Division Most Valuable Player.
“It’s amazing and I honestly didn’t know I was the first from the South to get that red MVP from MAC,” Drake said. “It’s a great achievement and I want to thank the organization and my parents for all and all their hard work. I was very proud.
While being MVP this season in baseball, Drake started his sports career many years ago playing football. He spent his fall high school season on the gridiron as a running back and linebacker for the Blue Devils. However, Drake found himself in love with baseball, from the first chance he had to play Little League Baseball and never looking back.
As he continued to play football, baseball became where Drake really wanted to make his mark and the game he worked tirelessly to improve for years.
“It started to get fun in Little League when I saw all these kids around the world playing it,” Drake said. “There are so many different aspects of the sport with hitters and defensemen. There is so much joy and fun in sports. My parents pushed me to work harder because they saw the potential I had and I saw it too. I started begging them to go practice and go play.
His work ethic made Drake an ideal fit for South’s baseball program from the start. With the program’s winning pedigree, Drake is the kind of athlete who knows what kind of hard work and commitment it takes to meet and exceed those expectations.
According to Drake, learning from a Hall of Fame head coach in Dan Griesbaum Sr. and a veteran staff is one of the biggest benefits of playing for a program like South. Without their teaching, their motivation and their recommendations, reaching an MVP level of play might not even have been possible.
“They push me to go to different workouts at places like 2SP Sports and the Macomb Batting Cages,” Drake said. “All the summer training and winter shots we do, they really taught me my technique.”
The work ethic isn’t the only thing that made South the perfect place for Drake during his high school baseball career. While hard work and success are always nice, for him one of the best things about being a Blue Devil is the feeling of family.
“It’s a great team,” said the MAC Red MVP. “They make you feel at home and they treat you as if you were one of their children. It is a very complete organization. »
Great coaching and years of hard work cemented Drake as a key player in South’s roster for his senior season this spring. At home plate, on the field and on the mound, he was able to put on some big performances in different places for the Blue Devils throughout the season.
From hitting home runs to shutting things down on the mound, Drake certainly played his part in helping the Blue Devils win an elusive MAC Red title this year. That’s exactly why he was named MAC Red’s MVP and All-Star team member for the MAC vs. OAA All-Star game on June 21.
Memories of this season and all of his time in South will certainly stay with Drake as he heads to Xavier University, where he will play baseball as an extra. Reaching the next level has always been one of his goals, and this season has helped him brighten his future while securing his legacy in Blue Devils history.
“I wanted to go out with a bang,” he said. “I wanted to do my best for the team. I wanted to accomplish a lot of things and I made the All-Star Game, led the team in average and got MAC Red MVP. I wanted to go out with a bang because it’s my last season and I wanted to get noticed, and I really think I succeeded.
To nominate a future athlete of the week, visit grossepointenews.com/athlete-of-the-week.