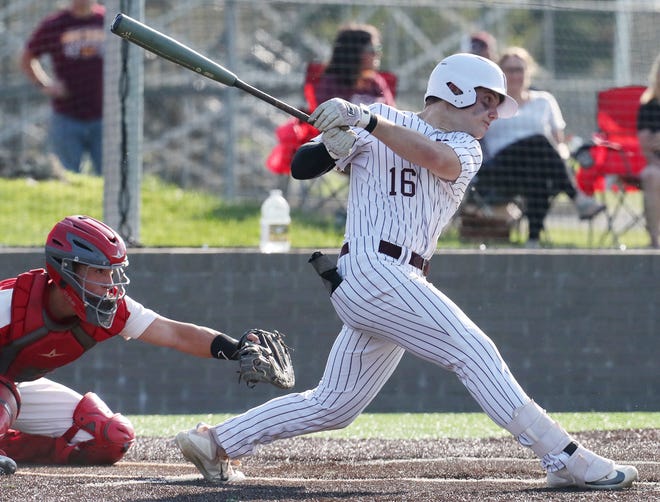 The Beacon Journal baseball all-star team for the 2021 season includes a state champion pitcher from Archbishop Hoban and multiple players from Revere and Walsh Jesuit.

Hoban senior right-hander Dylan Snyder joined a group of seniors, juniors and freshmen in the starting lineup to lead the Knights (24-9) to the Division II state title at Canal Park. Hoban finished the season with a 16-game winning streak that included sectional, district and regional titles.

Snyder was Hoban’s ace and earned a spot on the Beacon Journal baseball all-star team with an 8-1 record, a 1.33 ERA and 77 strikeouts in 63⅓ innings. He is set to continue his academic and baseball careers at Baldwin Wallace University.

Student-athletes from all Summit County schools, plus Highland and Wadsworth are eligible for selection to the all-star teams.

Walsh Jesuit teammates Henry Kaczmar, Erik Stern, Ryan Piech and Jake Armsey have been selected to the baseball all-star team after guiding the Warriors (28-4) to a Division I state semifinal appearance.

Kaczmar, a junior shortstop and University of Michigan recruited, earned first-team All-Ohio honors in Division I. He compiled a .568 batting average with 54 hits in 95 at-bats, scored 46 runs, had 42 RBIs and hit four home runs, two triples and a single-season school record 18 doubles.

Piech, a sophomore and Xavier recruit, compiled a 10-2 record with a 0.87 ERA and 78 strikeouts in 56⅓ innings. He earned second-team All-Ohio honors in Division I.

Shimek, a junior, was named the SLAC Player of the Year. He finished the season with a .405 batting average, 34 hits, six doubles, three triples, three home runs, 25 RBIs, 28 runs and 11 stolen bases.

Fischer, a senior, was named the SLAC Pitcher of the Year and threw a no-hitter against Kent Roosevelt. He concluded the season 8-1 with a 2.40 ERA and 37 strikeouts in 49⅔ innings, and was a honorable mention All-Ohio in Division II.

Norton, a Malone recruit, guided Tallmadge (17-10) to a Division II district final appearance as a hitter and pitcher. He had a batting average over. .320 with 26 hits and two home runs; and went 5-3 on the mound with a 0.81 ERA and 75 strikeouts in 51⅓ innings. He no-hit Pepper Pike Orange in a victory, and had a no-hitter through seven innings in what turned into an extra-inning loss to Lakewood St. Edward.

Hendrickx was named the Principals’ Athletic Conference Player of the Year and struck out a CVCA school-record 17 batters in a no-hitter win against Manchester in May.