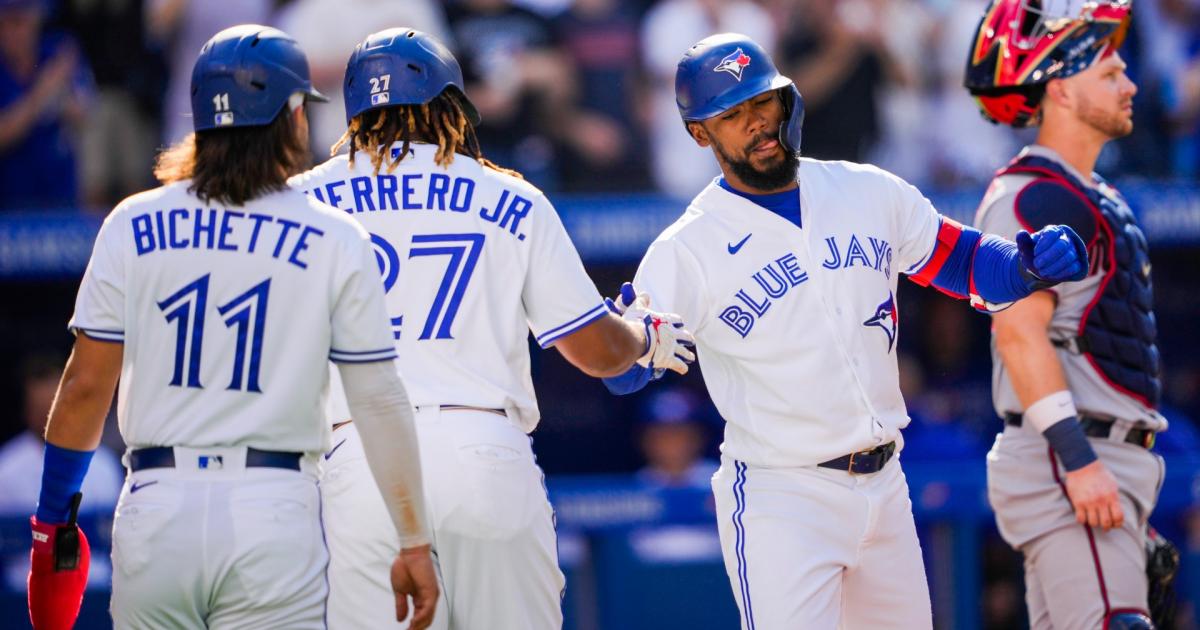 The Blue Jays posted one of the best offenses in MLB in 2021. Is their roster for 2022 even better?

Toronto was second in team batting average (.276), fourth in on-base percentage (.330) and first in slugging percentage (.466). Losing AL MVP finalist Marcus Semien hurts, but the team has taken steps that can make up for Semien’s vacancy.

General manager Ross Atkins got a daily third baseman, acquiring Matt Chapman in a trade to the A’s. He essentially replaced Randal Grichuk with Raimel Tapia, and the team gets a healthier George Springer.

Oh, and all of the youngsters — namely, Bo Bichette, Vladimir Guerrero Jr and Cavan Biggio — have another developmental offseason under their belts.

Expectations are high for Toronto, with World Series aspirations very real and very possible given the makeup of the roster.

The Blue Jays open their season Friday at home against the Rangers, taking on Semien, who signed with Texas in the offseason. It’s the start of what could be an outstanding season, and it all starts with the team’s superb starting line-up.

What is the Blue Jays starting lineup?

The official Opening Day batting order is not yet known, but here’s a look at the anticipated primary roster the Blue Jays will roll out over the course of the season.

Deciphering the composition of the Blue Jays

Springer is looking for his full and healthy first season as a Blue Jay. He played less than half the games last season after signing a six-year contract with Toronto; he faced quadriceps and knee injuries. He didn’t play at all during spring training as a precaution, but manager Charlie Montoyo maintained that Springer was ready. Springer has hit .264 with 22 homers and 50 RBIs in his limited action in 2021. When healthy, he’s one of the best hitters in the league.

While the hot topics with the Blue Jays last season were Vladimir Guerrero Jr. and Robbie Ray, Bichette emerged as a legit shortstop. He proved that his first two short-lived seasons were no flukes. Bichette led the American League with 191 hits while batting .298 with 29 home runs and 102 RBIs. Bichette’s 6.0 WAR placed fifth in the AL and he received four MVP votes. Don’t be surprised to see the 24-year-old take another step forward.

The AL’s most dangerous hitter from last year is back. Guerrero would have been voted AL MVP had it not been for Shohei Ohtani’s emergence as baseball’s version of a unicorn. The 24-year-old slugger ranked first in the AL in runs (123), OBP (.401) and slugging (.601), tied for first in home runs (48), finished second in hits (188) and was third in batting average (.311) and WAR (6.8). Vladdy Jr. is already one of the best hitters in the game.

Hernandez had his first All-Star season in 2021 while setting a .296/.346/.524 slant line. He tore up 32 homers and had 116 RBIs, third in the majors. The 29-year-old figures to get a good game of DH at bat. He’s not a liability in the outfield, but Montoyo has better defensive options.

He is the new face of the Blue Jays infield. Toronto acquired him to lock down the hot corner. There’s no doubting Chapman’s gauntlet: He’s a three-time Golden Glove winner and one of MLB’s best defensive third basemen. But the Blue Jays are betting on his bat. He posted a career-low .210 average last season. With all the power in the roster, Toronto doesn’t need Chapman to be the .279 hitter he once was. But any improvement over last year in terms of the dish would certainly be welcome.

The 28-year-old Cuban finally had a full 162-game season on the Blue Jays roster since his final arrival in 2019. He hit .276 with 21 home runs and 84 RBIs. With Grichuk no longer on the roster, Gurriel should be Toronto’s everyday left fielder.

Tapia was acquired as part of the deal that sent Grichuk to the Rockies. The 28-year-old has posted very respectable numbers in Colorado, but Coors Field is a hitter’s dream. The question will be how Tapia’s strike translates to Rogers Center and the rest of the AL parks. He hit .273 last year, .321 in 2020, and .275 in 2019. Tapia also brings speed to base paths as well; he stole 20 sacks last season. He also gives the Blue Jays a left-handed bat for an outfield that previously had none.

Jansen is what most catchers are in the majors – a great defensive option who isn’t so good with the bat. It has pop, however; he hit 11 homers last year with a .473 SLG. Not bad for a batter who batted .223. Jansen is in line to be the go-to receiver until prospect Gabriel Moreno is ready to take over later this year or next.

Biggio was the odd man out last year after the Blue Jays brought in Semien to play second base and Santiago Espinal got the third base job. Now he has the daunting task of replacing Semien, who finished third in AL MVP voting. The 26-year-old from Texas is nowhere near Semien’s caliber, but with more reps he could be a reliable hitter down the order. Biggio posted career lows in batting average (.226), OBP (.322) and slugging (.356) while dealing with injuries for most of the 2021 season.

Don’t be shocked if Espinal is more of an everyday player than a bench option. The 27-year-old from the Dominican Republic played 92 games last season. He hit .311 in 246 plate appearances and replaced Biggio at third base. He can play third, second or shortstop, making him a great utility option.

The big receiver is more useful with the bat than behind the plate, but he thinks he’s Jansen’s replacement for now. He will have competition from Zack Collins on the major league roster and Moreno in the minors. Kirk hit .242 last season with eight home runs and 24 RBIs. He will have to be better in the box if he wants to play more often.

Katoh was one of the feel-good stories from spring training. The California infielder has been bouncing around the minors since 2013, but he’s impressed the Blue Jays staff enough to be selected to the 40-man roster. He hit .304 with Triple-A El Paso last season, but his defensive versatility is what makes him useful. He’s played first, second, third and left field in 2021, so he’s like a southpaw version of Espinal.

The 26-year-old has spent part of the last three seasons with the White Sox. He played 78 games for Chicago in 2021, batting .210 with four home runs and 26 RBIs. Like Kirk, he faces tons of competition at receiver. With the Blue Jays potentially considering Kirk as a DH option, they’ll need a third receiver if anything happens to Jansen.