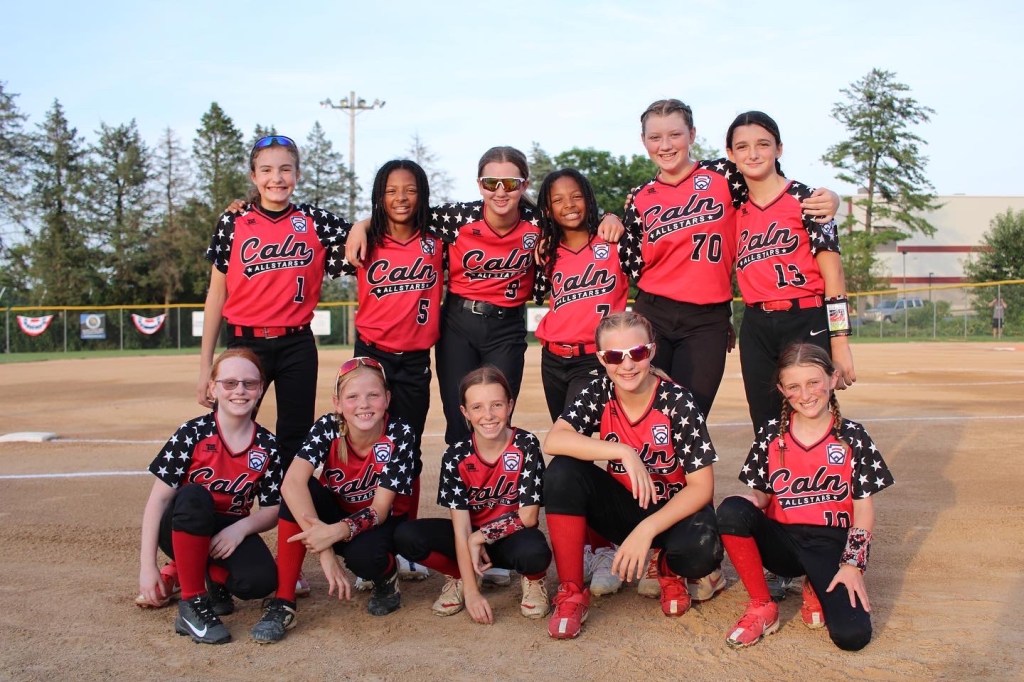 Just a day after the Caln LL 10U softball team won the Eastern Regional Little League 8-10 Softball title on August 6, a three-mile parade was held for the team on Business Route 30 from Coatesville High School to the Caln LL Complex.

Led by fire companies from Thorndale, Coatesville and Westwood, the Caln players rode in the back of pickup trucks. When they turned onto Municipal Drive where the Caln LL complex is located, they were greeted by a crowd of about 200 supporters lined the street. The team then entered the pitch under an arch of red and black balloons to greet their fans and savor their hard-earned victory.

“My most vivid memory of the parade was seeing all the girls pile into the beds of the vans with their signs and banners and the expression of pure joy on their faces,” said head coach Brian Seybert. “To be honest, it was quite emotional even for me that so many members of the community went out of their way to make this achievement so special and memorable for the girls.”

The Eastern Regional title is the highest achievement at that level of Little League softball, as there is no World Series for the age group. The Eastern Regional Tournament consisted of 10 state championship teams from Maine to Maryland and the host team, Pittston Area (Pennsylvania), which received an automatic invite from the host district.

Caln secured the title by winning both games of a Pittston Area doubleheader by scores of 2-0 and 3-0. With the double sweep, Caln completed a five-game winning streak after losing his second match of the double-elimination tournament, including four wins over the final two days of the tournament.

On the final day of August 6, Caln LL needed to win both matches to be crowned tournament champions. Kaylee Seybert pitched both games of the doubleheader and allowed just four hits in both games while striking out 19 Pittston area players over the 12 innings.

For coach Seybert, his best memory of the tournament was the final.

“After all the other tournaments, we won [District 28, Section 7 and Pennsylvania], the girls never went crazy with a celebration on the pitch immediately after the final,” he said. “They were briefly celebrating and putting down their masks and gloves and preparing to shake hands with their opponent, which shows the incredible character of the girls and what their parents instilled in them and as if they felt there was more work to do to achieve their ultimate goal.

“However, after the last out in the Eastern Regionals, it seemed like they all immediately understood and felt the satisfaction of the team’s ultimate accomplishment and celebrated together on the pitcher’s mound.”

Seybert was also impressed with the post-game festivities.

“Having all the families and supporters who made the two hour drive take a photo with the team and the banner on the pitch was something really memorable,” he said. “To see so many people who have taken the time to come to the games in person or watch online, to all be part of this special achievement, it was very rewarding and humbling.”

The week-long tournament opened with a tournament banquet on July 31 at the Woodlands Inn in Wilkes-Barre, which included a welcome from the tournament directors, team presentations and a dinner and dance for the girls.

The following day, Caln defeated the Vermont State champion, 8–0, in the tournament’s opener. Kaylee Seybert threw a no-hitter, while striking out 16 over the six innings. Megan Sheller led the Caln All-Stars with four stolen bases.

The next day, the Caln girls had the day off and visited Montage Mountain to have fun at the water park with the team and their families. On August 3, Caln lost to the Rhode Island State champions, 5-3, then bounced back the next day to defeat the New York State champion. The score was tied 4-4 in the fifth inning when Madelyn McIntyre put Caln ahead for good with an RBI groundout scoring Layla Fulton.

In the next contest, on the morning of August 5, Leah Fulton was brilliant on the rubber in a 1-0 win over New Jersey State champion Toms River Little League, giving up no hits while striking out nine and walking just two in six innings. Caln scored the game’s only run when Megan Sheller doubled on a line drive to left field that scored Gia Belfie, who stole second downfield before Sheller’s hit.

Later in the day, Caln exacted revenge on Rhode Island, winning 6-2. Seybert and Hannah Clark both doubled triples for the winners.

In the August 6 opener, a 2-0 win, Sheller scored on a goal-packed walk from Layla Fulton late in the second. Caln added another run when Fulton scored from first on Seybert’s triple late in the fourth inning.

In the final fight, a 3-0 win, Blakely Wimmer picked on a hard ground fly to center field to start the third inning, was advanced to second over Fulton, then after an intentional walk to Seybert, scored on a single by Macie Atkinson.

Caln assistant coach Shawn Atkinson said: “Before Macie (my daughter) came out of the dugout, I said to her, ‘They just put Kaylee on because they’d rather face you. Take it personally and hurt me!”

Seybert then drove home that run on wild ground to make it 2-0 and ruled out Pittston the rest of the way. In the last two games, on the mound, Seybert was helped by a remarkable lineout from Belfie at second base.

“This group of girls clicked and fit in so well,” said Brian Seybert. “I think it was that camaraderie and togetherness that made it easier for the girls to handle the most stressful and tense moments. They never seemed to let the moment get too big or overwhelm them. -he had a few tears and deep exhales before a big hit or a throw, absolutely, but the girls were always able to keep their composure and play in the biggest moments. There were a few elimination games in along the way in districts and states where they had their backs against the wall and we ended up on a few tracks but they never wavered they never gave up which ended up every time with the girls playing and pulling win victories in such times.

Peoria Chiefs, an affiliate of the St. Louis Cardinals, cheer on the Iowa Little League team