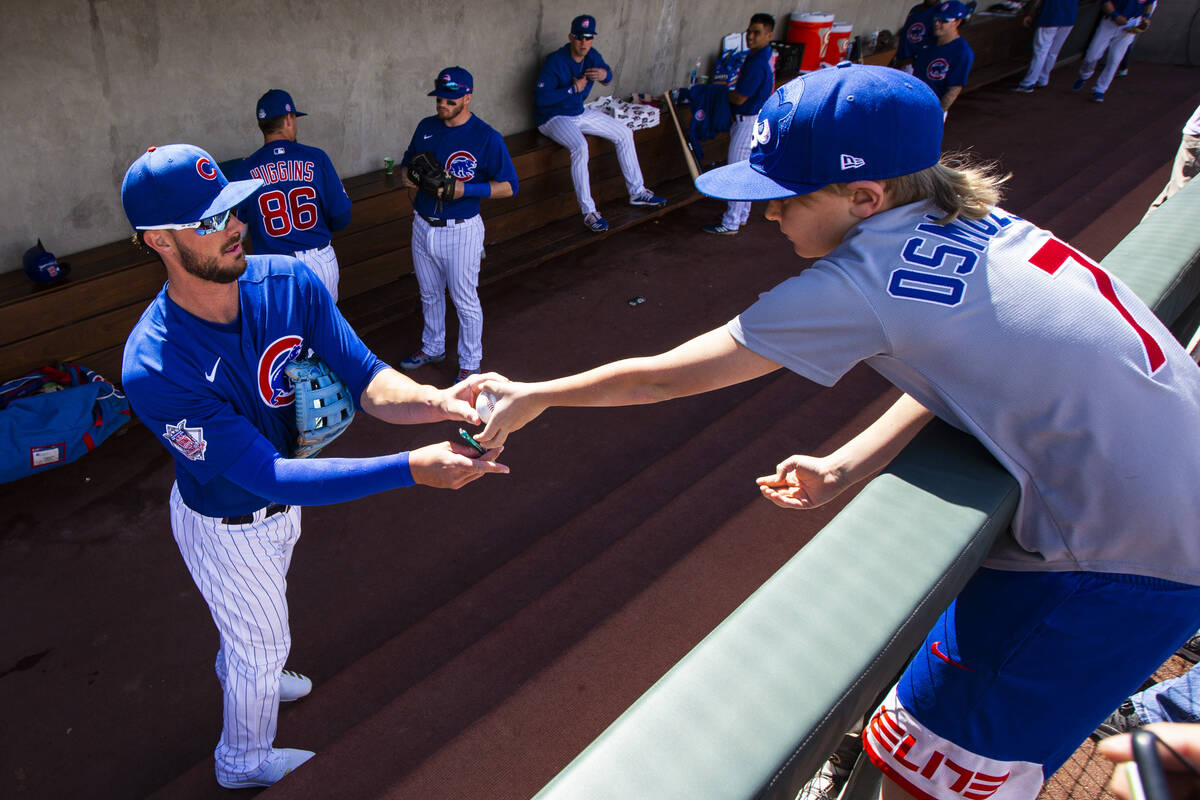 Tickets for the second Big League weekend of 2022 at Las Vegas Ballpark featuring the Arizona Diamondbacks and Colorado Rockies on March 18-19 go on sale Tuesday.

Provided Major League Baseball’s labor lockdown is resolved in time, the Oakland A’s and Cleveland Guardians will meet on the first Big League weekend on March 12-13.

Do the math: After making 18 appearances in the MLB Las Vegas showcase, the Chicago Cubs won’t appear in 2022 — lockout or no lockout.

“We talked to them like always,” Aviators president Don Logan said of talks with the Cubs’ new executives about extending the relationship. “They said they wanted to take a year off. We said ‘Why?’ ”

The Cubs participated in Big League Weekend for 14 consecutive seasons from 2005 to 2018. In 1993, the Cubs and Chicago White Sox drew a crowd of 15,025, setting the attendance record at Cashman Field.

Logan said the thousands of people who have followed the Cubs’ divided team in Las Vegas from their spring training in Arizona, combined with the team’s huge following in southern Nevada, would seem to justify keeping from the Serie.

“We went back and forth…they said they didn’t want to do it. We said it’s okay, we’re going to rest for a year,” Logan said.

The Cubs gutted the core of their 2016 World Series-winning squad last season, parting ways with popular and cherished stars such as Anthony Rizzo, Javier Baez and Las Vegas native Kris Bryant before the trade deadline.

Rizzo’s spot at first base was taken by former Aviators hitter Frank Schwindel. It would have been nice to host “The Tank” again for Big League Weekend, but, as they’ve said in Chicago for 108 years, maybe next year.

After watching Las Vegas High’s Taviontae Jackson score 34 points and control both ends of the court in a 71-51 win Wednesday at Green Valley, it was speculated that when the full stats package was available, the McDonald’s All-America nominee could be credited with a triple-double in points, rebounds and assists.

According to the LVHS basketball team’s Twitter account, Jackson finished with 34 points, 23 rebounds — not bad for a 6-foot-2 guard — six assists and six steals.

Former Bonanza High football star Gerald Riggs got a nice mention during the Chiefs-Steelers NFL playoff game when a chart noted Pittsburgh’s Najee Harris had 381 touches without a fumble – the second most of an NFL season.

The chart showed Riggs had 430 touches without a fumble during the 1985 season, when the three-time Pro Bowl selection rushed for 1,179 yards and 10 touchdowns and caught 33 passes for 267 yards for the Falcons. Atlanta.

– The Parade of NASCAR Carriers down the Strip to the Las Vegas Motor Speedway returns ahead of the Pennzoil 400 weekend March 4-6. It will be March 3, with details, including the exact time and route, to be announced on Monday.

The Parade of Carriers on the Las Vegas Strip is 𝘽𝘼𝘾𝙆 for the #Pennzoil400 race weekend!

It will be Thursday evening March 3! More info to come. pic.twitter.com/DCMvDEOtw4

–Former American Motorcycle Association Flat Track National Champion Joe Kopp tops a list of dirt bike racers to be inducted into the “Hot Shoe” Hall of Fame on Jan. 29 at the Notoriety Theater of the Fremont Street Experience.

Hot Shoe Hall of Fame honors Ivan Mauger OBE, ‘the greatest sprinter of all time’ in Las Vegas on January 29, 2022.

Many thanks to Debbie for the news of Ivan’s induction.

And a big thank you to Founder and Curator Gene Woods.

— Before singer Meat Loaf, who died Thursday at age 74, became a semi-regular in Las Vegas, he coached a cash-strapped junior women’s varsity softball team in Connecticut free. Presumably the 1991 Barlow High Falcons ran the bases like a bat out of hell.

One silly thing I’ve always loved about Meat Loaf is that when he played celebrity softball games, the back of his jersey said “Loaf” like it was his last name. pic.twitter.com/QeDV6qXTFr

Meat Loaf on how he convinced former Yankees shortstop and broadcaster Phil Rizzuto to inject some excitement into the baseball soliloquy for the hit song “Paradise by the Dashboard Light”:

“We had pizza, so I took four boxes of pizza, put them in the studio, turned on all the lights. I started running the pizza boxes as bases, and would slip into one every once in a while. And all of a sudden, he got it, and he nailed it.

Holy cow, it’s time to remember every little thing like it happened yesterday. The intersection between Meat Loaf and Phil Rizzuto: https://t.co/Sl6FyU8I8L

The State of High School Cross Country in Indiana – Part I