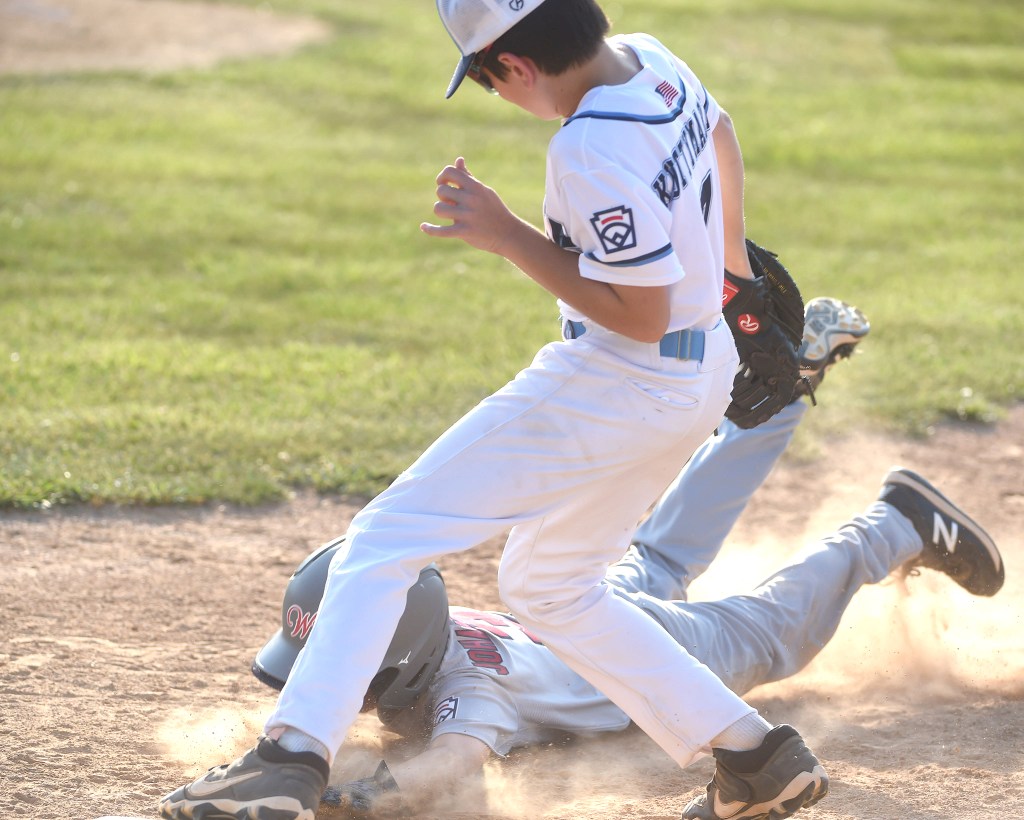 WHITEMARSH — Aston Middletown’s Little League side find themselves in a familiar position after losing the opener of the Section 8 tournament on Tuesday to host and defending Tournament champions Whitemarsh, 8-0.

Coach Mike Simone’s boys also had their backs against the wall in the District 19 tournament. After dropping the opener, AM went on to win seven games in a row, including two in a row over Marple Township to win the District Championship.

And so… here they are again.

It was a weird game. Several controversial calls went against Aston Middletown, starting in the first inning when it appeared third baseman Sameer Dhillon had a dead Whitemarsh baserunner on the right on the pick of a ground ball fielder. But the third base umpire ruled that Dhillon had missed several attempts to tag the runner, who returned safely to second base. Starter AM Riley Comisiak managed to out the third without allowing a run.

The alleged biggest blow call was a backbreaker for AM. It happened in the fifth inning as the team trailed 4-0. With runners in the first and second rows and no one coming out, Whitemarsh’s Kyle Tenthoff hit a soft ground to Hoffman, who started a flawless 6-4-3 double play.

The plate umpire ruled — several seconds after the ball was in play — the catcher’s interference on Colt Sullivan. This erased the double play and Tenthoff got first base. With the bases loaded, Whitemarsh fired in on three runs to take a 7-0 lead.

“The referees have a difficult job, they give their time to do it. I’m not going to blame anyone,” Simone said. “We just didn’t hit today. Some things didn’t go our way, but we didn’t hit the ball the way we know how to.

“We will go out tomorrow ready to fight. … I told them that if there is a team that can do it, it’s us. We have won seven games in a row in the districts. I said to them, ‘What do you think? Do you think we can do it? And they all said they did. I said, ‘Coaches believe in you. It’s you guys now. We came up with a plan today and it didn’t work. And our bats weren’t alive today.

Dhillon, who was 2 for 3, started the second innings with a single but got stuck. Deven Kutty Martin walked one one out in third and moved to second on wild pitch, but was left on base. AM made some noise in the fifth inning when Rocco Simone singled and Kutty Martin reached base on a pitch-hit, but AM couldn’t take it. Round six was more or less the same. Brady Orr and Dhillon each scored a single, but Pasquarello drove in for the next two batters, ending the game.

Aston Middletown will play in the losers’ group on Wednesday at 6 p.m. They’ve been there before and done it before. All they need this time around is four wins. Is the magic still there? Everyone thinks so.

“We lost the first game in districts and then we won a ton of games in a row…and we won the championship as well,” said Hoffman, who landed a fantastic over the shoulder grab and then returned to first base for a brace. play the third inning. “I think we can definitely come back, bounce back from this. Don’t worry about this game, it’s in the past. Let’s bounce back and get ready to play.