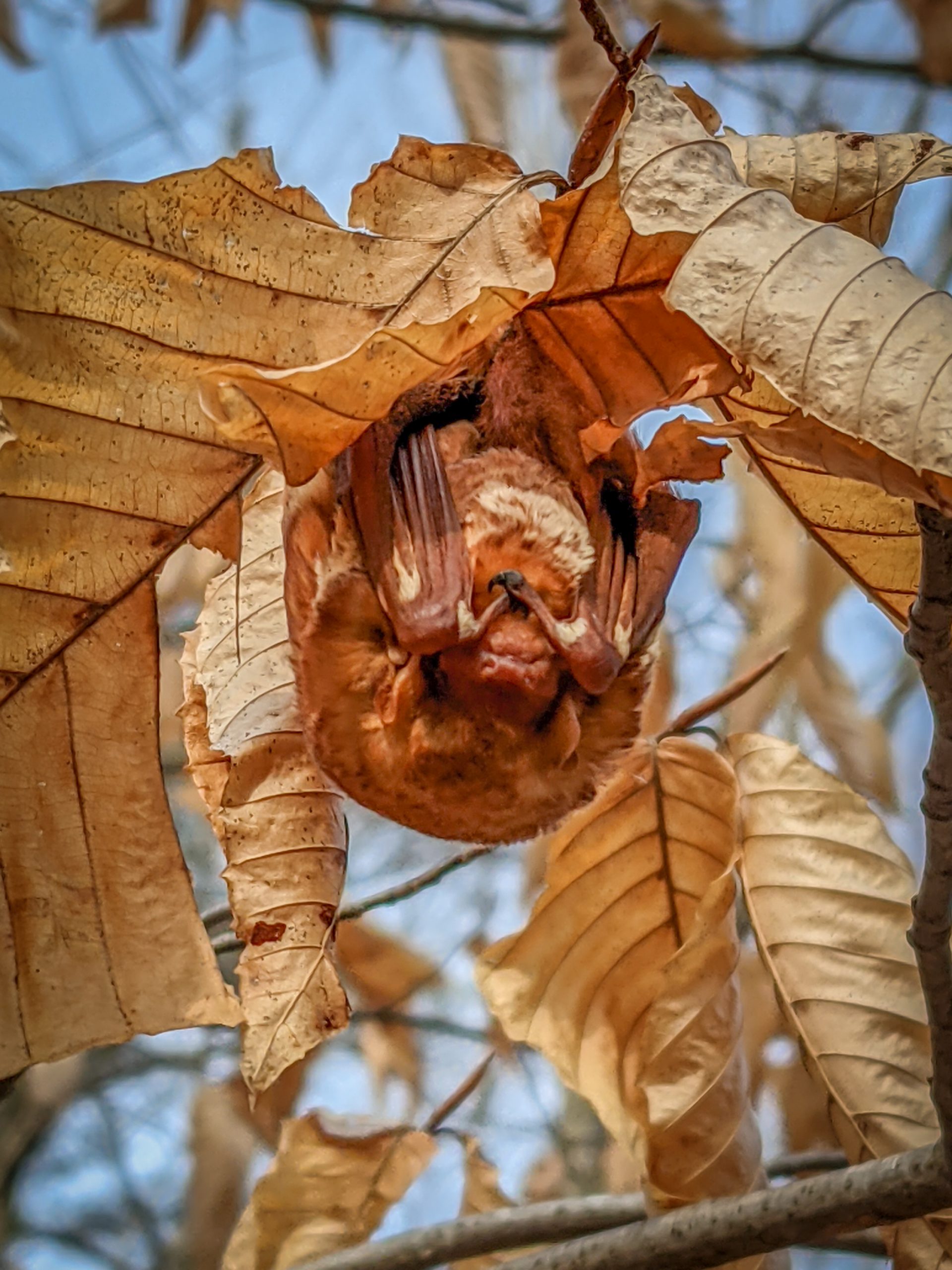 The following article was written for the Ripples from the Dunes series, by Kennedy Zittel, Assistant Naturalist for the Woodland Dunes Nature Center and Preserve.

Woodland Dunes conducts bat surveys every year to see what species of bats are found around our reserve and how many of each species we encounter. Recently during these surveys, we discovered that this area is home to a large population of bats, which is wonderful! This large amount of bats is probably due to the large number of resources located here (and a healthy insect population, too!). Bats are great! They are the only flying mammals. They use echolocation to help them see in the dark. And a single bat can eat up to 1,000 insects in an hour. That’s a lot of mosquitoes! Now that it’s colder outside… what happens to our bats during the winter?

Bats are classified into two groups depending on how they choose to overwinter. There are arboreal bats – those that roost in trees and migrate in the winter. And there are cave bats – the ones that hibernate in caves and mines during the winter. In Wisconsin, the arboreal bats are the silver-haired bat, the greylag bat, the eastern red bat, and the evening bat. In Wisconsin, the cave bats are the little brown bat, the big brown bat, the northern bat, and the oriental pipistrelle.

Arboreal bats typically roost in trees. These bats will begin to migrate as early as September. They will look for areas with a warmer climate than where they started from and which also have an abundant food source (insects) to help them get through the winter season. For example, greylag bats, which are among the most common bats to see here in Woodland Dunes, will move south and congregate in large groups along the US coast and in northern Mexico.

Cave bats spend the winter going through a cycle of torpor followed by periods when they are awake with a high body temperature (depending on the weather). Torpor involves physiological changes such as changes in body temperature and metabolic rate that allow the animal to survive periods without food. During the winter, a bat’s breathing rate, metabolism, and heart rate are all reduced. By reducing these rates, a bat can reduce its energy costs by 98%! During this time, a bat can go for minutes without breathing, and its body temperature can drop to near zero. The bat’s heart rate can also drop from 200 to 300 beats per minute to just 10 beats per minute! It’s crazy ? Bats choose places like caves, mines, natural fractures in rocks and other such structures because of their constant temperature and humidity levels. The place where a bat hibernates is called a hibernaculum.

A big problem that has devastated cave bat populations is a disease called white nose syndrome. This disease is caused by a fungus (Pseudogymnoascus destructans) which thrives in the cool and humid conditions of caves and mines. This fungus infects the living tissue of bats and brings them out of torpor too soon. By waking them up too early, bats deplete their fat stores too quickly, which starves them. Once a cave is infected with the fungus, there is a 95% death rate of bats in the cave. Currently, there is no cure for the disease, although scientists are working hard to find a way to stop the disease before it kills more cave bat populations.

We humans often talk about the importance of our pollinators and how we should protect our pollinators, however, we often forget that bats are pollinators too! They pollinate things like bananas, mangoes, guavas, cocoa, dates, figs, cashews, and peaches. Our nocturnal pollinators are just as important as daytime pollinators, and bats need our help. The next time you see a bat, instead of being scared of it, think about how many mosquitoes this little bat is going to eat just that night, and how bats are. cool creatures worthy of our love and support.

Mohammad Azharuddin in the late 90s was a remarkable player due to his athleticism: R Sridhar