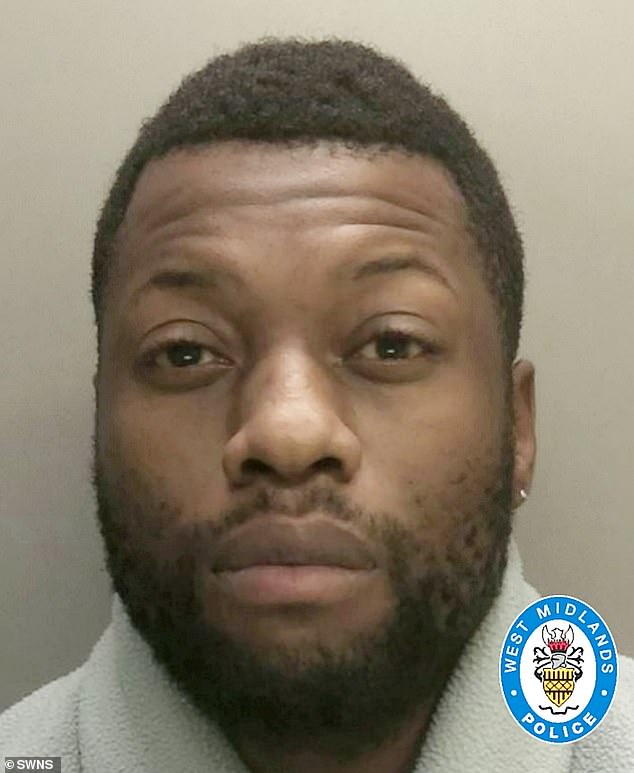 A gang who beat a teenager with baseball bats before stabbing him to death in the forecourt of a BP garage after a row with his friend has been jailed.

Pavandeep Daudher, 19, was fatally stabbed in the leg after being jumped by masked thugs armed with bats and knives in Holbrooks, Coventry, on March 31 last year.

The teenager was found in a pool of blood in the forecourt of the petrol station before later dying in hospital.

Jason Cornwall, 34, Riley Kavanagh, 20, Kane McCarron, 18, and Ethan Lilley, 24, carried out a planned revenge attack in retaliation for a low-level ‘feud’ that Pavandeep wasn’t even in involved, a court heard.

The gang members each denied carrying out the attack, but were found guilty following an eight-week trial at Warwick Crown Court in October.

They appeared in the same court on Wednesday to be sentenced.

Cornwall was sentenced to 11 years in prison, while Kavanagh and McCarron were both jailed for nine years. Lilley will be sentenced at a later date.

The court heard Pavandeep’s friend Zaakier Challoner, 21, had an argument the day before the attack which resulted in a window at Lilley’s home being broken.

Jason Cornwall, 34, was sentenced to 11 years in prison at Warwick Crown Court for his role in the stabbing

Ethan Lilley (pictured), 24, from Coventry, will be sentenced for manslaughter at a later date. The court heard Pavandeep’s friend Zaakier Challoner, 21, had an argument the day before the attack which resulted in a window at Lilley’s home being broken.

Pavandeep Daudher, 19, was fatally stabbed after being beaten with a baseball bat outside a petrol station in Coventry

Threatening text messages were then sent from Lilley’s phone to a friend of Mr Challoner saying: ‘One of your friends will get curtains eventually.’

The men picked up Mr Challoner later the same day and spotted his silver Audi A3 at the service station around 11pm.

The defendants, all wearing masks inside a dark gray Ford Kuga on fake plates, arrived and jumped out of the vehicle before launching the vicious attack outside a Shop N Drive store.

CCTV showed they were armed with weapons including baseball bats, poles and knives.

Pavandeep was thrown to the ground, where he had his bag stolen before sustaining a nine centimeter deep leg wound.

Prosecutor Edward Brown QC said at the trial: “It was planned, it was staged and it was fatal.”

“Pavandeep Daudher died as a result of the attack. He was stabbed and bled to death.

“It arose following perceived sleight of hand over a minor incident at Ethan Lilley’s home. It involved a broken window and insults being shouted at Ethan Lilley.

The men also chased Mr Challoner into the Kuga and rammed his Audi into nearby Station Street East before smashing its windows with baseball bats.

He was stripped of his bag and jacket before being stabbed in the foot.

He later said in a statement, “I will feel guilty until the day I die that he died and there was nothing I could do to save him.”

The men left and the Kuga was later found burnt out on grassland in the Willenhall area of ​​the city.

CCTV footage of the area and cellphone recordings not only linked the four men to each other, but also showed that they were in the Kuga on the day of the murder.

Delivering her sentence, Judge Sylvia de Bertodano told the court: “In an incident that lasted less than a minute, you attacked Pavandeep Daudher.

“He was fatally stabbed and you left him bleeding to death as you went after Zac Challenor.

Rescue teams rushed to the petrol station just before 11pm, but Pravandeep later died in hospital

The 19-year-old was found in a pool of blood on the forecourt of a BP garage in Holbrooks after being stabbed in the leg.

“I have no doubt that if he hadn’t been trapped in his car so you couldn’t get to him properly, he would have been seriously injured as well.

“Whatever the cause of the feud, and whether Pavandeep was even a real target or just plain unlucky, it was a feud that this teenager paid the ultimate price for.

‘It is not possible to see [on the CCTV] which man stabbed him. The prosecution says it wasn’t one of you three or Lilley, it was a fifth man.

“Pavandeep Daudher was a young boy on the threshold of life, he had a bright future ahead of him and he was a much loved only son. The pain of this savage and senseless crime can only be imagined.

Lilley, Cornwall and McCarron were also convicted of theft in connection with Zaakir’s attack. Kavanagh was found not guilty of the charge.

In a second related trial in October, a fifth man, Callum Bowman, 30, was found not guilty of manslaughter and robbery.

Lucas Hutchinson and a second man, who cannot be named for legal reasons, were found guilty of aiding an offender after helping destroy and dispose of the stolen Kuga.

Hutchinson, 19, from Coventry, was jailed for three years.

Speaking after the sentencing, West Midlands Police CID Detective Inspector Stuart Mobberley said a mother had been ‘deprived’ of her only child.

He added: “This vicious attack was sparked by a seemingly low-level argument that escalated into such violence that a mother was deprived of her only child.

“Today our thoughts remain with her and the rest of Pavandeep’s family. I can only hope that this condemnation will bring some comfort in this difficult and upsetting time.

“Crime and knife violence has no place in our communities and the consequences can be devastating, as they have been for Pavandeep’s family.

“And this investigation shows that we will prosecute not only those directly involved in the knife crime, but also those who try to help them escape justice.”