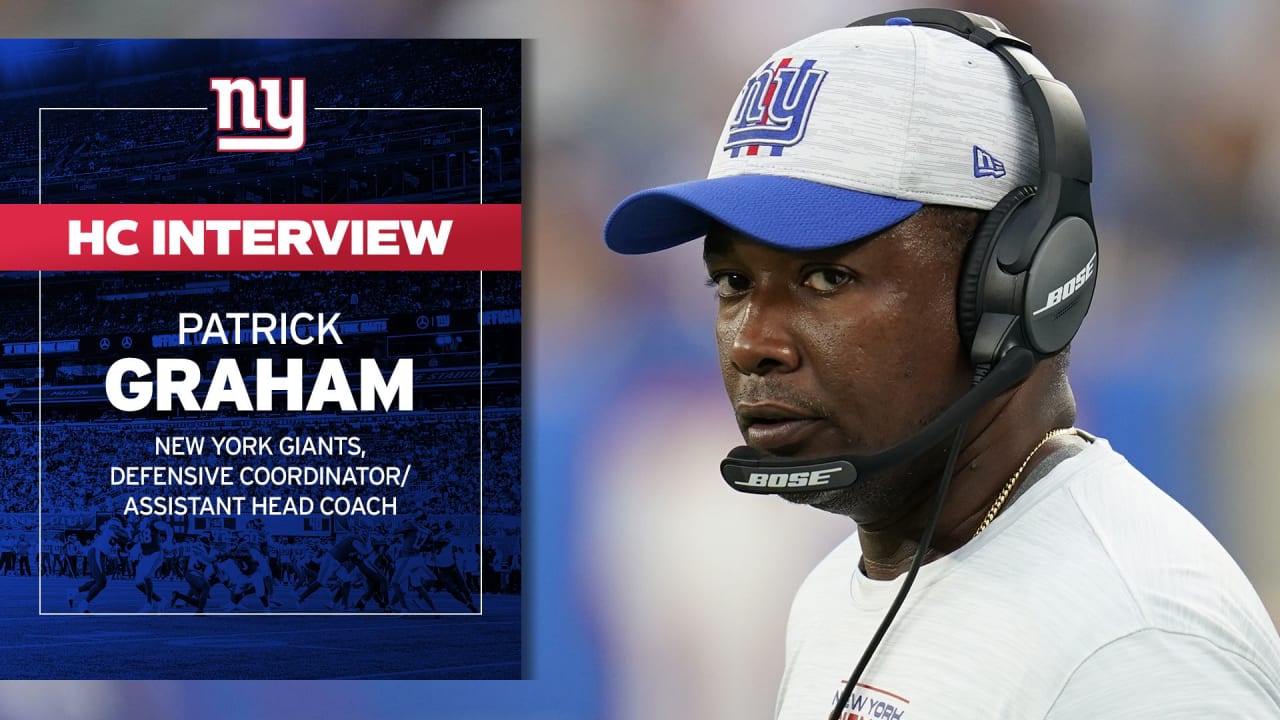 EAST RUTHERFORD, NJ – Patrick Graham, defensive coordinator/assistant head coach for the Giants the previous two seasons, today became the fifth candidate – the first in-house – to interview for the position of head coach of the Giants .

Former Miami Dolphins head coach Brian Flores is scheduled to speak with the team on Thursday, while Frazier will have an in-person meeting with club officials on Friday.

Graham has received a lot of praise for his game planning and defensive signal calling work over the past two seasons.

In 2021, the defense kept the Giants competitive in several games when the offense struggled to score points, despite the short or long term loss of Blake Martinez, Jabrill Peppers, Logan Ryan, Adoree’ Jackson and Lorenzo. Carter due to injury or COVID-19. Although the Giants finished 21st in the NFL in giving up 354.8 yards per game, they were 11th after giving up an average of 5.3 yards per game.

Tae Crowder, the 255th and final selection in the 2020 NFL Draft, replaced Martinez to call plays in the huddle and led the Giants with 130 tackles. Sophomore safety Xavier McKinney had a team-high five interceptions and won the NFC Defensive Player of the Week award. Azeez Ojulari led the team and was second among NFL rookies with 8.0 sacks.

The Giants’ defense improved dramatically in Graham’s first season as coordinator. The unit ranked ninth in giving up 357 points, 94 shy of their 2019 total.

The defense was 12th in the NFL in giving up 349.3 yards per game after finishing 27th at 377.3 yards the previous season. It was their best defensive result since 2016, when they were 10th in the league in allowing 339.7 yards per game. The Giants’ opponents averaged just 5.3 yards per play, the ninth-lowest number in the NFL.

Graham has 13 years of NFL coaching experience with four teams. He coached in the playoffs in eight of those seasons and was part of teams that won seven division titles, two conference championships and a Super Bowl (XLIX with New England).

Graham was the defensive coordinator for the Miami Dolphins in 2019.

Prior to joining the Dolphins, Graham spent the 2018 season as the Green Bay Packers inside linebacker coach and defensive play coordinator. Under his tutelage, Martinez totaled 144 tackles (91 solo) and a career-high 5.0 sacks. Green Bay’s defense held opponents to 4.3 yards per carry, 13th in the league.

Graham’s line was instrumental in the Giants fielding the most improved defense in the NFL in 2016. The team allowed 158 fewer points and 1,290 fewer yards than they did in 2015. Their 17 .8 points per game allowed was second in the NFL and best on the team since 2002.

Graham began his NFL coaching career in New England, where he spent seven seasons with the Patriots (2009-15). He was an assistant coach in 2009 before being promoted to defensive assistant in 2010 and linebackers coach in 2011. Graham moved to the defensive line from 2012-13 before returning to linebackers in 2014-15.

During his tenure with New England, the Patriots won the AFC East title all seven seasons, the conference championship twice, and Super Bowl XLIX. In his five years as a positional coach (2011-15), New England led the NFL in takeouts (150) and tied for fourth in sacks (214).

Graham played collegiately at Yale, where he was a defensive lineman for the 1999 team that shared an Ivy League title with Brown. He earned his bachelor’s degree in sociology with a concentration in economics and African-American studies.

Originally from Waterbury, Conn. (born in Des Plaines, Illinois), Graham and his wife, Pamela, have two children, Morgan and Silas.