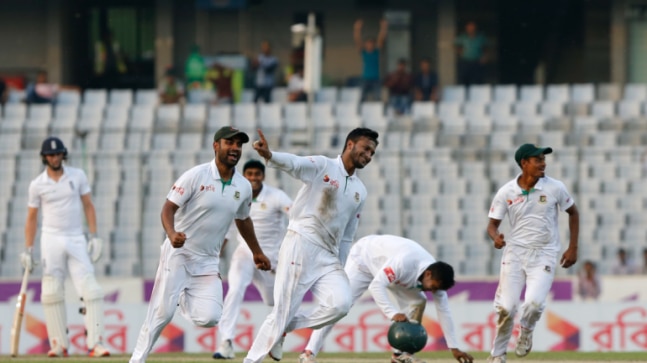 Bangladesh batting coach Jamie Siddons has hailed the appointment of Shakib Al Hasan as Test team captain. Shakib, who was banned from cricket for failing to report a corrupt approach, was re-appointed after Mominul Haque opted out of the mantle.

Shakib’s appointment comes just after Bangladesh lost their home series to Sri Lanka. The nomination surprised many, as Shakib had constantly argued with the BCB for picking and selectively choosing which series he wanted to play.

Siddons expressed his confidence in the all-rounder and said he will play every series now that he has been named captain.

“When he’s captain, he’ll have to play. It’s quite difficult to be a captain [a side] when he’s not playing. I think he’s excited to be captain again. I think we will get to see a great example of leadership that we may have been missing for some time,” said the Australian.

“I think it will be the confidence of the captain [the side]’, Siddons explained how Shakib’s tenure might be different from that of his predecessor.

“Shakib did it [captaincy] before. He has the confidence and the players behind him. Not that Mominul didn’t have [any of these] but the players seem to be following a lot of Shakib’s work. So it will be fantastic to have him back in charge. And Mominul can now go and play cricket,” Siddons added.

Asked about the renewal itself, Siddons took a sneaky dig at Mominul, saying Bangladesh hadn’t been at their best in terms of playing the game, and that should change if Shakib takes control of the dressing room.

“I think there are two positives [of Shakib being reappointed as the captain]. Shakib is a very good captain and a very good thinker of the game. He is also a constant performer. So he will do a great job as a captain. Everyone follows him. So he will be a great leader,” the coach said.

The Aussie hoped Mominul would return to his best against West Indies as the team desperately needed him to perform.

“The other good thing is that Mominul can now focus on his stick, which he struggled a bit in. So now he can focus 100% on his stick. We need him to perform well. “We know he’s a good player and we need to get that back. It will be nice to see him without the captain’s weight on his shoulders so he can just be a bit free with his cricket,” Siddons concluded.