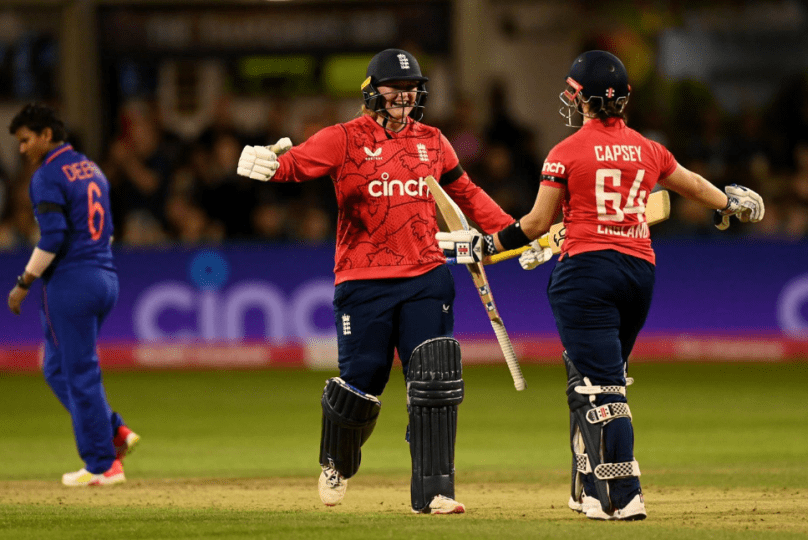 IND-W vs ENG-W Highlights – England win by 7 wickets – Alice Capsey and Sophia Dunkley starred as England took a comfortable 7-wicket win at Bristol on Thursday. Chasing 123 to win, England sealed victory with 10 balls to spare to clinch the series 2-1. Both teams will now move on to the three-game ODI series. Follow INDIA-Women vs ENGLAND-Women live updates with InsideSport.IN.

Sophia Dunkley and Danni Wyatt got England off to a flying start in what could have been a tricky pursuit in Bristol on Thursday. As Dunkley cashed in on his limits, Wyatt held anchor as the pair went 70 for the opening wicket in just nine overs. India however recovered with Sneh Rana sacking Wyatt.

#TeamIndia fought hard but it was England who won the third T20I to win the series 2-1. #ENGvIND

Radha yadav then kicked a young girl to shift the pressure, before Pooja Vastrakar brought Dunkley out for 49. Amy Jones quickly missed a straight from Radha Yadav and suddenly England looked a little uncomfortable, needing 44 over the last seven overs. Capsey and Bryony Smith took their time at first before the former launched with some limitations. Alice finished the chase with 10 bullets to spare.

Earlier, Amy Jones won the coin toss and put India to bat in the deciding game in Bristol. The Women in Blue struggled as England bowlers went wild as Harmanpreet Kaur and Co slipped to 35/5 in the first 10 overs. Deepti Sharma and Richa Ghosh then resurrected the sets, taking India past the 100-point mark. Vastrakar then hit three limits in the end to win India 122/8.