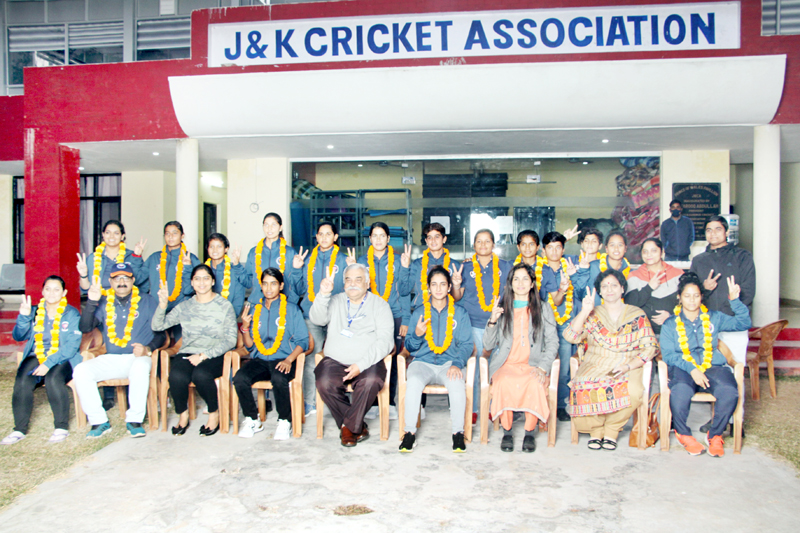 Excelsior sports correspondent
JAMMU, November 15: J&K Senior Women received an enthusiastic welcome from the Jammu and Kashmir Cricket Association (JKCA) as they arrived in Jammu from Bangalore here today.
The senior women’s team J&K, led by skipper Sandhya Sayal, was greeted by the brigadier. (Retd) Anil Gupta, member of the JKCA administration and others at the JKCA Office Jammu putting garlands around the necks of the JKCA players and officials who accompanied the team.
At the league stadium, the J&K team put on a magnificent performance in the prestigious BCCI Senior Women One Day Trophy and won all five of the six matches. They beat Sikkim, Arunachal Pradesh, Nagaland, Bihar and Manipur, but lost to Meghalaya in the last league game played in Calcutta on November 5, while in the pre-quarterfinal match. , Team J&K also lost to Delhi at Alur Cricket Stadium in Bangalore in November. 13 and finished the campaign in the tournament.
It is relevant to mention here that it was for the first time in the history of the J&K Cricket Association that a women’s team qualified for the knockout stage.
The Jammu and Kashmir women’s team were joined by Chetan Dhingra as head coach, Ankita Jalla as manager, Rajesh Dhar as co-manager, Abida Khan as bowling coach and Meenu Singh Slathia as a field coach.