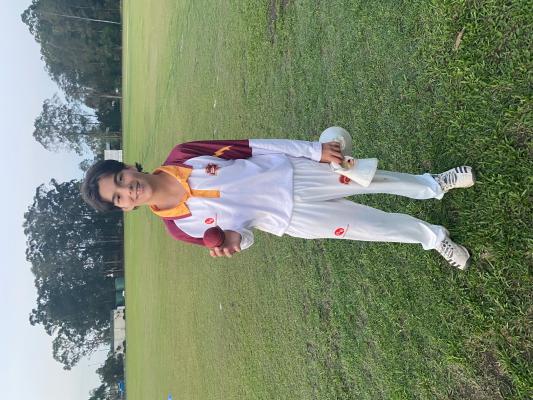 Quote of the week from former test captain Ian Chappell – “The last positive thing England did for cricket was to invent it!”

Three wins in four games for the senior Thunder teams last weekend. Highlights of those games were the five wicket runs to former international Ben Laughlin with 5 for 8 and teenager Finn Mayo’s 5 for 30 in the sixth against Yandina.

THE FIRSTS Last Saturday, the Thunder First Grade team won their â€œ13th consecutive chanceâ€ to start the season. The team were in Caloundra and presented themselves in front of a very dry powdery wicket, which was unusual for this pitch.

Thunder struck first and it soon became apparent that the sluggishness of the pitch would mean any score over 150 would be welcome. The first drummers pushed their way through and several were caught in front of the wicket trying to drive. Veteran Andrew Kratzmann (26) hit well and later Dom Taylor (34) held the innings together to put the team in a position to be aggressive in the last 15 overs. Cody Pyne came out and played a mature, aggressive 49-step round, faster than a ball run to get the final score up to 174 with 70 coming in the last 10 overs.

The opening bowlers started strong, holding Caloundra 2-18 out of the top 10 with â€œTearawayâ€ Tom Stewart taking both wickets. Caloundra played slow bowlers well for the next ten overs to see them 3-59 of 20 in the first drink break.

The seam pitchers took over and Scott Aufderheide made the breakthrough straight away and the three rapids pressed the Lighthouse beaters on every ball to keep them 5-88 of 30 with the game still in balance.

The next 5 overs saw 6 runs scored and the pressure mounted and with just one quick attempt, Ben Laughlin threw the stumps to ward off their top scorer. From there it was the Laughlin masterclass that took the last 4 wickets to see Caloundra all for 102 in the 38th. He finished the game with the big numbers of 5 for 8 on 10 overs.

A very good performance on a pitch that was really unsuitable for the Thunder’s quick scoring beaters. Next week, the team are home to face Caboolture in a 50-overs game, starting at 10 a.m.

SECONDS The team faced the Caboolture Snakes at Read Park last Saturday. Without the captain, the team came out ready to go further after Caboolture won the toss and decided to strike first. Ben Giddy and Billy Lloyd-Green opened the bowling alley followed by Cooper Lea and James Denslow. Some wickets fell with very few races to begin with. Fielding and catching was first class with Leon Beatty taking a cracker to give Billy his first wicket of 2nd year. After the break, the bowling got even better with Lachlan Webster playing straight and taking two. Jason Toohey put the pressure on with Cooper Lea and Giddy picking up at the other end and playing fast and straight. Thunder managed to eliminate the opposition for 116.

After losing a first wicket, it became the spectacle of Pete Walker and Jason Toohey. The pair started with Pete bravely hitting and the pair went over the mark with 15 overs to spare. Pete finished with 82 and Jason 26. It was a good effort for the team who had lost three key players.

FOURTHS The team faced Yandina at Dale Officer Oval and the day ended in disappointment after her victory the previous weekend. First, the TNT bowlers were in the lead with Yandina at 5 for 19 in the 8th. However, from then on, the afternoon was rather difficult with Yandina hitting almost at will, finishing her 40 overs at 9-259 with newcomers Billy Hewitt and Tom Daly, on their senior debut, each picking up a few wickets each. The best box taker was Mike Thomson with 4.

Beating in second, the Thunder’s batting roster collapsed to 69 points. A very disappointing match for the team.

SIXTH The team were eager to follow up on their last match win and beat Yandina first. However, the start was not what was wanted and soon TNT was at 3 for 24. Brendan Chaplin and Wayne Moore stabilized the ship and added 50 before Chaplin was taken on 25. David Lyons came on to hold the scoreboard and the pair added another 50 before Lyon were out for 24. The team finished their 40 overs on 9 for 187 with Moore undefeated on 66

Bowling later, Brendan Chaplin took two Yandina wickets to get them 3 for 82, still with another 100 to score. This is the closest they would get with teenager Finn Mayo doing a fascinating demonstration of leg rotation after the break with 3 stumps and mistaking their captain’s scalp for a golden duck who saw young Mayo try a hat trick. The youngster finished 5 for 30 on 8 overs, ensuring the Thunder boys returned home with the win under their belt.