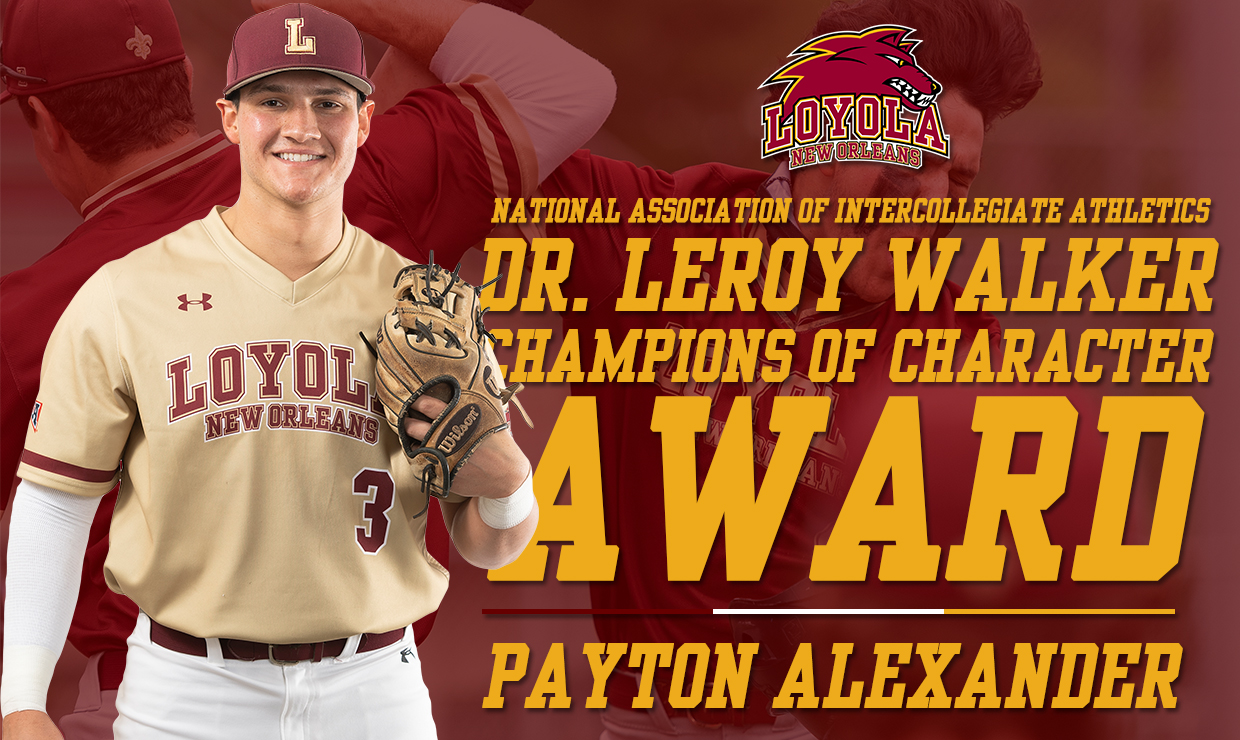 KANSAS CITY, Mo. – Payton Alexander, a baseball senior from Loyola University in New Orleans, has had an unforgettable 2021 season, and it just got even more memorable. The National Association of Intercollegiate Athletics (NAIA) announced its national winners on Wednesday, selecting Alexander as the recipient of the Dr. LeRoy Walker Champions of Character award.

The Dr. LeRoy Walker Champions of Character Award for Student-Athletes is one of the NAIA’s most prestigious awards and was created in association with the National Sports Foundation, a group of sports organizations that promote and recognize the sportsmanship. Dr. Walker was a former president of the NAIA and president emeritus of the United States Olympic Committee. The award honors outstanding student-athletes for their education, sport, leadership and dedication to living the core values ​​of Champions of Character.

Wednesday’s announcement also adds to a long list of accomplishments for Alexander. The Prairieville, Louisiana native was named the Southern States Athletic Conference Player of the Year and Male Athlete of the Year after his phenomenal 2021 season. He was also selected as a NAIA All-American as well as in the All-Louisiana team.

Alexander was nominated by the SSAC for the Dr. LeRoy Walker Award in July after Loyola Athletics nominated him in June. Each conference selects a candidate to be considered for the overall NAIA winner, and applicants must have a GPA of 3.00 or better and have reached a junior academic level.

With a degree in biological sciences, Alexander plans to pursue a career in medicine after his stint at Loyola. With one more year of athletic eligibility he earned a minor in psychology to extend his bachelor’s degree and he plans to take the MCAT this year to begin the medical school application process. While leading the Wolf Pack baseball team to a historic season, Alexander posted a 3.82 GPA in the last school year. The center infielder led the team with a .387 batting average and he also broke the school record with 61 runs scored last season, while also scoring 12 doubles, 10 home runs with 52 RBIs. his fourth season with the Wolf Pack.

Alexander is currently chair of the Student-Athlete Advisory Committee and he has also been on two mission trips to San Jose, Belize, to organize camps for children to teach math, arts and science.

Behind Alexander, the Wolf Pack recorded their best season in program history, winning 36 games, winning an SSAC regular season championship and hosting an opening NAIA tournament, all first on the program. Aided by a 12-game winning streak, Loyola finished 36-15 overall and 16-2 in the SSAC game and he finished the season No.14 in the NAIA Top 25 poll.

Loyola baseball head coach Jeremy Kenedy:
“The character, integrity and courage that Payton has shown this year is just amazing. He has handled an incredibly difficult academic workload while also excelling as the SSAC Player of the Year and All-America Honorable Mention on the baseball field. Payton is also a team leader who leads first by example and then vocally. He has mentored many young players who first see how he runs his business and then were touched by his mentorship. ”

Associate Professor of Biological Sciences, Rosalie A. Anderson, Ph.D.:
“I had the great pleasure of knowing Payton Michael Alexander as his advisor for his major in biology, his professor and his research mentor. Based on my experiences with Payton in the classroom, in the lab, and knowing him as a person, I can say without hesitation that he ranks in the top 1% of students I have taught in 20 years. His values, humility, talents, determination, sense of responsibility and work ethic have made Payton a champion in the classroom and on the pitch. It was a pleasure to know this young man.

Loyola’s baseball teammate Patrick Crifasi:
“I couldn’t think of anyone more deserving of the Dr. LeRoy Walker Champions of Character Award than Payton Alexander. Having had the honor of playing baseball with Payton, I am proud to call him not only my teammate, but also a great friend of mine. I was able to witness his tireless dedication to his profession not only on the pitch but also off the pitch. To me, there is no better example of someone who embodied the five core values ​​of Champions of Character than Payton was for me and all of our teammates. As a man of integrity, Payton has always remained true to himself, committed to his goals and stood up for what he believed in. While Payton has always been a vocal leader on our team, it was his actions that spoke louder and motivated us all. to be better at everything we have done.

Loyola Sporting Director Brett Simpson:
“What a huge honor for an exceptional young man. Payton Alexander exemplifies both the five core values ​​of the Champions of Character program and the Jesuit ideals upon which Loyola was founded. A true person to others, Payton has been a driving force behind the competitive and academic success of our baseball team. We are delighted that he has been recognized for his leadership.