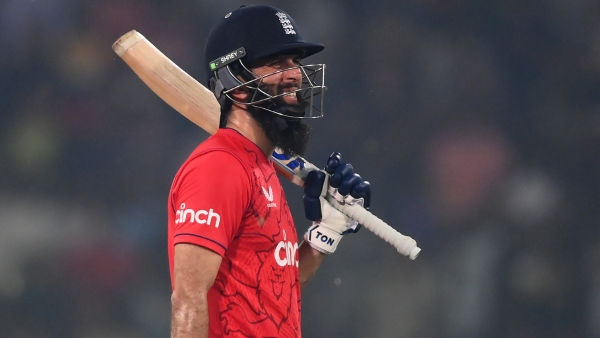 Mark Wood (3-20) knocked out half of Pakistan’s top six as England knocked out the hosts for 145 carries in 19 overs at Lahore, a reasonably low tally considering Mohammad Rizwan was top scorer with 63 out of 46 bullets.

However, England were unable to chase Pakistan’s tally despite Moeen going half a century with just 35 balls, unassisted as they found themselves 31-3 after five overs.

And Moeen was frustrated with his team’s display, telling reporters: “Of all the games so far it was the most disappointing, the way we hit in particular.

“Obviously I’m disappointed that we haven’t continued those runs. I think we’re a better team than that. You have to see the game situation and the conditions.

“All we needed was a partnership, a 60-70 partnership would have won the game. We want to play this attacking brand but you also have to see the game situation and the conditions, things like that .”

Moeen also spoke of his admiration for Rizwan while reserving praise for Pakistani rookie tailor Aamir Jamal, who played superbly in the final over to limit England to seven points when 15 would have won them the game.

“He is [Rizwan] a brilliant player, so hard to stop and so busy. He’s someone we can learn a lot from,” added Moeen.

“[Jamal] was in his debut, nervous, but he was playing really well.

“Two big hits and it’s over. I got one but unfortunately couldn’t get the other one. Sometimes you just have to give it to him, that was a good last.”