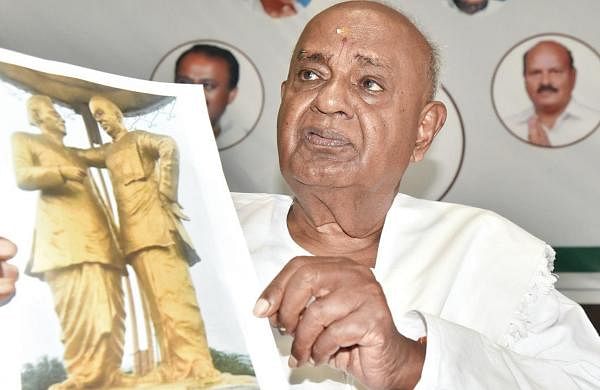 BENGALURU: JDS supremo HD Deve Gowda said on Friday that he had no connection with the RSS, as BJP national secretary general CT Ravi claimed, and added that he had no praised the organization in the past. Speaking to the media at the party office here, Gowda denounced Ravi for spreading disinformation on social media.

Ravi had recently tweeted how Gowda had a word of appreciation for RSS in the past and that HD Kumaraswamy should find out about the organization from his father before commenting on it. Kumaraswamy had recently accused the RSS, as part of its “hidden agenda”, of having created a team of bureaucrats in the country. “There is a limit to lying. Apart from the provision of the banquet hall (to Vidhana Soudha) for an event that I had chaired when I was CM, I had no relation with the RSS. I even raised an objection when the RSS abused the banquet hall, ”Gowda said.

Gowda defended his party’s decision to field Muslims for the Hanagal and Sindagi Assembly polls, saying it was necessary because Congress was poaching its likely candidates.

“I had trained MC Managuli and he became Minister three times. Managuli even erected a statue for me. Now Congress has poached his son Ashok Managuli and sent him from Sindagi. Should I be silent in such a situation? He asked. The bypoll at Hanagal was made necessary after MC Managuli disappeared earlier this year.
Gowda further added that sending a Muslim in the recent Basavakalyan poll was also inevitable. “The late Narayan Rao was also my sishya. Did I take care of him taking into account his caste? ” He asked.

Gowda clarified that he did not put forward Muslim candidates in an attempt to defeat Congress. “There are examples of Muslims winning seats in the past. In old Mysuru, including Hassan and Mandya, we don’t have any potential candidates from the community to present, ”he said. “I will not tolerate propaganda against JDS. He (Siddaramaiah) shouldn’t forget the past and remember where he came from as a leader, ”said Gowda, indirectly digging up Sidddaramaiah.

Asked about Congress MLC CM Ibrahim’s return to JDS, Gowda, on a positive note, said the former had enough political maturity to make a decision. He also made it clear that he would only campaign in Sindagi to retain the seat.

“Kharge proposed for the CM post”
Gowda said he suggested to Sonia Gandhi after the 2018 election that Mallikarjun Kharge be made the CM of the state and claimed that the latter agreed. “As Congress won more seats than the JDS, it was embarrassing for us to claim the CM position. Top Congress leader Ghulam Nabi Azad has agreed to convince Sonia. If this did not materialize, they were convinced to make HD Kumaras-wamy the CM, ”he added. He also called the recent detention of AICC General Secretary Priyanka Gandhi Vadra in Uttar Pradesh unfair.

The key to England’s chances is to beat long: Vaughan