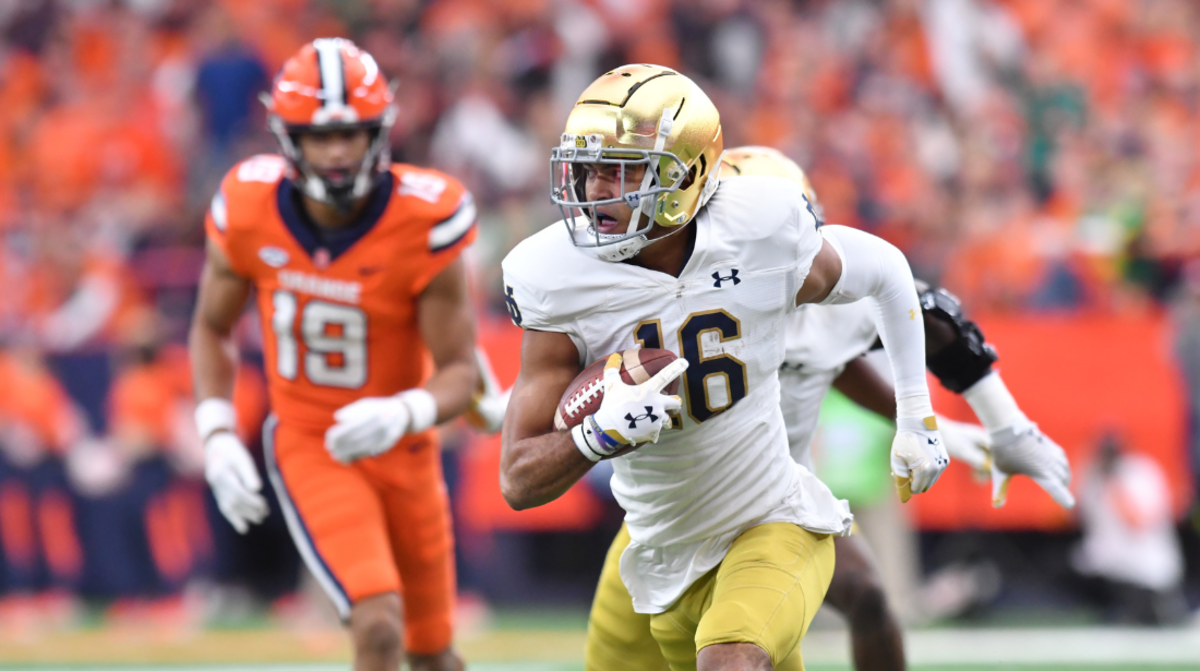 Notre Dame (5-3) earned its best team all-around win of the season when it went on the road and blasted Syracuse 41-24. The Orange came into the game 16th in the country, but the Irish were clearly the better side yesterday.

The nature of all-around victory led me to decide to distribute the game balls in a different way. Normally I choose one player on each side of the ball, but there were two units that deserved the game balls, and for different reasons.

Let’s talk about the players of the Irish in the victory against Syracuse.

I could have easily gone with Estime, who had 123 yards (6.2 ypc) and two touchdowns, or even Logan Diggs, who had 85 yards on his own and got out of the running game in the first half. -time.

Harry Hiestand has his unit playing at a very high level, and we saw that against Syracuse. Their timing was top-notch, their pushing was top-notch, and they did a great job maximizing yards and limiting negatives.

They did a great job getting a push and opening up running lanes that led to 246 rushing yards. They also gave the quarterback Drew Pyne a lot of time to throw away. This unit was simply exceptional, and while the center Zeke Correl and right guard Josh Lugg were both outstanding, the whole unit deserves review here.

Notre Dame linebackers have been the scapegoat for fans and analysts alike, and that has certainly been the case with the post-game analysis from myself and other Irish Breakdown staffers. The unit played better against UNLV, but they were pretty good against Syracuse and played a huge part in the win. They not only made game-changing plays, but they cleaned up the running game, they limited errors, and their aggression was key in limiting Syracuse’s ground attack, which didn’t had only 61 yards in the game.

Center Linebacker JD Bertrand was all over the field and was more active than his five tackles show. He was disciplined with his tackles, he attacked downhill and was hard to block and he did a great job sniffing out screens. We didn’t see much of Jack Kisserbut he did a great job reading a Syracuse backhand and blasting it for a six-yard loss.

Marist Liufau had a quality game from start to finish, but it was his interception in the fourth quarter that played a key role in Notre Dame opening this game. Obviously Al Golden has scaled things back a bit since head coach Marcus Freeman said it had to happen, but we’re also seeing linebackers start to understand what Golden wants, and the result has been a very good game against Orange. .

It would be unfair to give the ball to just one player, even the one who made the huge plays that Brandon Joseph done, so I went with the linebackers game as the best performance.

Joseph could easily have won the prize on defense, especially considering how huge his pick six on the first game was for the Irish. I went with the linebackers because of the importance of their game from start to finish, but I also knew that Joseph was going to be chosen by the special teams.

His numbers won’t blow you away – three returns, 23 yards – but Joseph was integral to the Irish victory in the field position battle. On two of his returns, he did a great job of first eliminating his teammates and then bringing the punt back on a rebound instead of letting it play. He only had 23 yards back, but you can add at least another 20-30 yards of saved field position by hitting hard jumps.

Irish Breakdown Fans, be sure to get your Notre Dame tickets from SI Tickets HERE

Be sure to check out the Irish Breakdown message board, the Champions Lounge

Become a premium member of Irish Breakdown, which gives you access to all our premium content and our premium message board! Click on the link below to find out more.

Make sure you stay locked in Irish Breakdown the whole time!