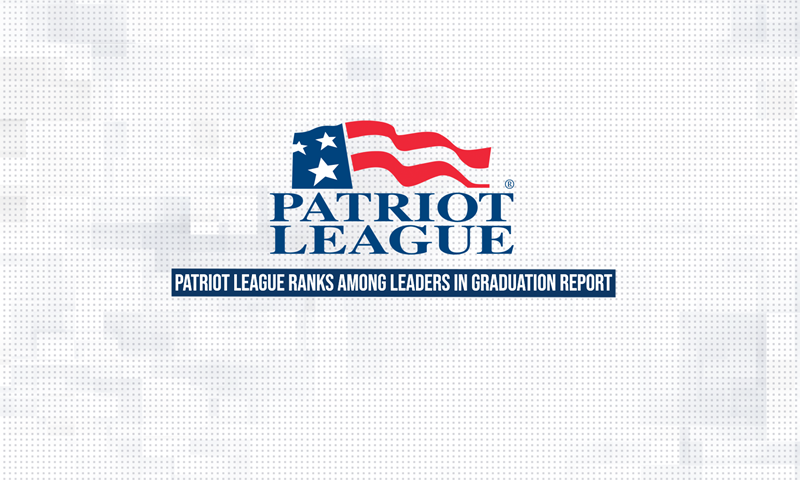 BETHLEHEM, Pennsylvania. –The Patriot League recorded a 96% pass-through-graduation rate (GSR) and an 88% federal graduate rate (FGR) in data released by the NCAA on Tuesday. The League ranked in the top two NCAA Division I conferences in both measures of student-athlete academic achievement.

The Patriot League’s FGR of 88% is the nation’s highest mark for the 10th straight year and two points higher than last year’s numbers. The League’s 96% GSR is the second highest rating in the country. The Patriot League has been among the top three NCAA Division I conferences in GSR every year since the rankings were introduced in 2013.

Graduation rates are the most recent graduating class on record that started school in 2015. In the four-year average of classes entering from 2012-2015, each Patriot League school recorded an overall GSR of 91% or more. Bucknell led the way at 99%, Holy Cross and Lafayette trailed at 98%, Colgate and Loyola Maryland finishing at 97%. Boston University (95), Lehigh (95), Navy (95), American (94) and West Point Army (91) all surpassed the national student-athlete pass rate of 89 .

Bucknell posted the League’s highest FGR score of 91%, with Colgate and Holy Cross tied at 90%. Lehigh (89), Boston University (87), Lafayette (85), Loyola Maryland (78) and American (69) all met or finished above the national average of 69%. Army West Point and Navy do not report federal graduation rates because they do not offer athletic assistance.

The Patriot League also finished among the top conferences in the nation in the latest GSR and FGR results for individual sports released by the NCAA, including baseball, men’s and women’s basketball and soccer.

The Division I Board of Trustees created the GSR in response to Division I college and university presidents who wanted data that more accurately reflected college student mobility than the federal graduation rate. The federal rate counts any student who leaves a school as an academic failure, regardless of whether they enroll in another school. The GSR formula removes from the rate student-athletes who leave school while academically eligible and includes student-athletes who transfer to a school after initially enrolling elsewhere. This calculation provides a more complete and accurate picture of student-athlete success. The federal graduation rate remains the only measure that allows student-athletes to be compared to all students.

For the NCAA report, as well as data for all schools, conferences, sports and years, please CLICK HERE.

ABOUT THE PATRIOT LEAGUE
The Patriots League is in its fourth decade of academic and athletic achievement, continually demonstrating that the student-athlete can excel both academically and athletically without sacrificing high standards. The Patriot League’s athletic success is achieved as its member institutions remain committed to its founding principle of admitting and graduating student-athletes who are academically representative of their class. Participation in athletics at Patriot League institutions is considered an important part of a well-rounded education.