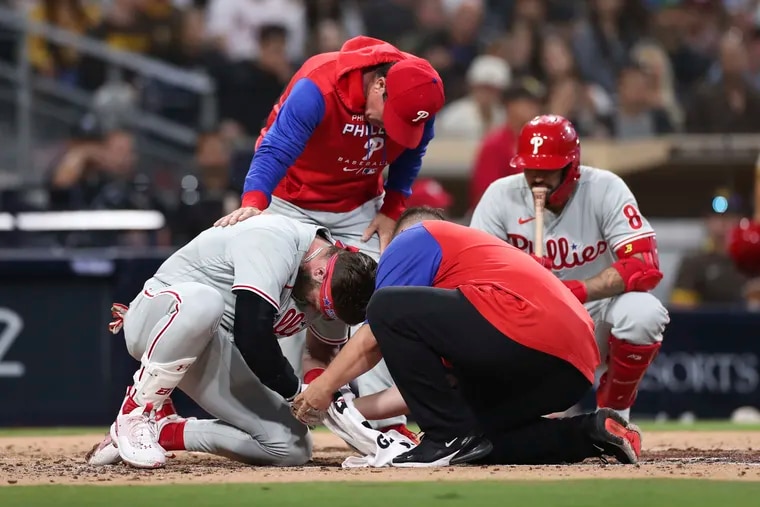 SAN DIEGO — The past 16 hours haven’t been kind to Phillies interim manager Rob Thomson. Its best player, Bryce Harper, was hit by a pitch around 8:05 p.m. Saturday night. The designated hitter left the game with a broken left thumb. Harper will see a specialist soon, but as of now, the Phillies don’t know how long he’ll be out or whether or not his injury will require surgery.

Thus, since Saturday evening, Thomson has been grappling with an unenviable task: replacing an irreplaceable player. But even though he knows his efforts will be in vain, Thomson must try. Completing his roster card for Sunday’s game was the first step.

He thought about it and spoke to batting coach Kevin Long on Sunday morning. They’re still weighing their options, but for Sunday they’ve decided to move Nick Castellanos up one spot to fill the three holes in the roster that Harper left vacant. Castellanos, who normally beats fourth, was replaced by Didi Gregorius.

The Phillies will continue to play with different ideas. Moving leadoff hitter Kyle Schwarber down the lineup is another possibility.

“[Schwarber] and [Rhys] Hoskins has been very good getting to base,” Thomson said. “But we’re just trying to figure out how we can get the most out of programming.”

Castellanos will be DH on Sunday and Matt Vierling will play in right field in place of Castellanos. The only silver lining to this – if you can even call it that – is that Schwarber and Castellanos will be able to use the DH spot, which was occupied by Harper, to rest.

“I think they could all benefit from [the DH spot]”, Thomson said. “It gives them a day off. But I know that the two [Castellanos] and Schwarber likes to play defense. It keeps them engaged in the game. But I think the DH spot, when you spin it, can help a lot of different people. Just to give them a break.

Harper was officially placed on the 10-day disabled list on Sunday ahead of the series finale against the Padres, and outfielder Mickey Moniak was recalled from the Lehigh Valley triple-A. Moniak will arrive in San Diego just in time for the 1:10 p.m. game.

After a scorching spring workout that ended with Moniak hit in the hand with a pitch and scheduled to be on the 10-day disabled list, Moniak returned to the big leagues on May 30. He’s struggled to find his shot, hitting .160/.250/.160 in nine games this season.

Moniak was sent to Lehigh Valley on June 14 and found more success there.

“He came down, worked hard, got his momentum back,” Thomson said. “He got three hits [Saturday], made a home run the other day. He bumps a little. He can play defense as well as anyone. So it’s good.”

In Harper’s absence, Moniak will have plenty of opportunities to show Thomson that he’s fixed what tormented him earlier in the year. The left-handed outfielder will be penciled on the Thomson roster card more often than not as the Phillies face right-handed heavy-pitch teams in Atlanta, St. Louis and Washington.

He’s not the only one with more playing time. Vierling will too, all over the diamond, along with some of the other young Phillies players (daycare, if you will).

“We’re going to line up a bit, with Vierling against left-handers,” Thomson said. “Maybe that gives Moniak a day here and there. And Vierling, we’ll have to mix him up at second base, third base to give the other guys the day off. I just love the energy that these (younger) guys bring, everyday. I am convinced that they will move things forward. »

Eflin will have his bruised right knee tested by Phillies coaches on Sunday afternoon. He said after his start on Saturday that he felt “gassed” after round five.