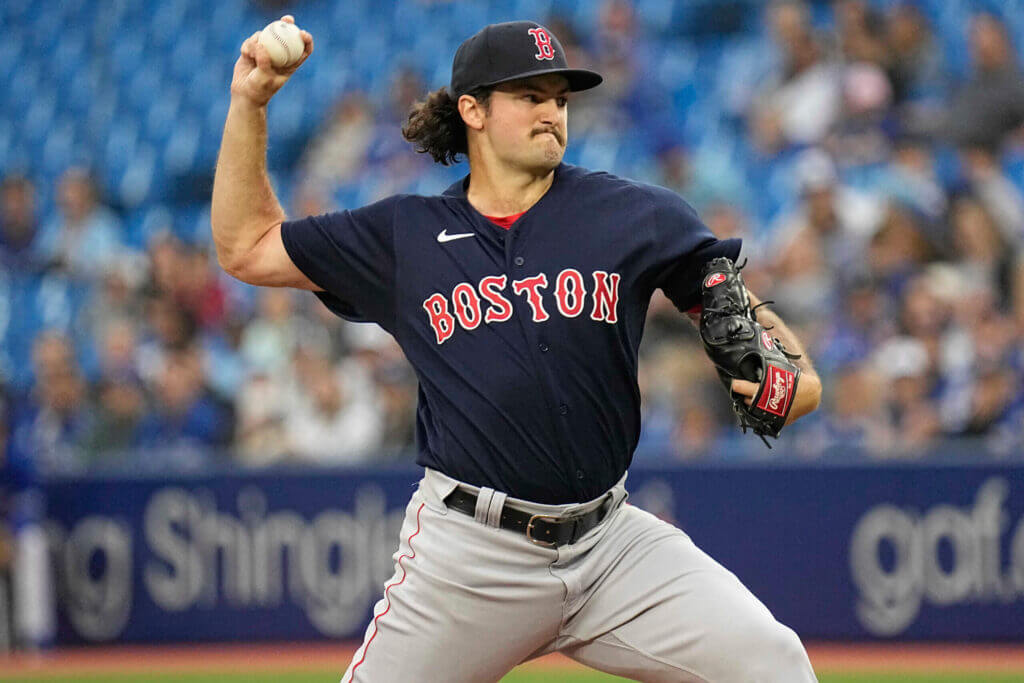 TORONTO — As the final home run left the yard, Red Sox starter Connor Seabold put his head down and slowly left the mound. He wandered to home plate for a while, picked up another ball and tossed it in the air. He was just killing time. Blue Jays third baseman Matt Chapman circled the bases and Red Sox manager Alex Cora was about to leave the dugout. Seabold was finished.

With their bullpen depleted and shorthanded rotation, the Red Sox needed a solid five innings from the starting rookie on Monday. Seabold instead allowed seven runs in 4 2/3 innings, losing to the Blue Jays 7-2 in Game 1 of the three-game series. The Red Sox now lead the Jays by just half a game in the American League East.

At a pivotal time in their schedule, the Red Sox need to start banging their heads at full power, but they’ve already had to dig deep into their throwing depth this season. Seabold was their 10th starting pitcher – already the same number they used all of last year. They’ve used eight pitchers for multiple starts this season, which is also already more than last year. They haven’t used as many spot relievers as they did last season, but their number of significant pitchers is already pretty close. Twenty-three Red Sox pitchers pitched at least 13 innings last season. The Red Sox have already used 18 of those pitchers this season. Their bullpen is half-full of pitchers who were sent to minors at some point this season.

“It’s part of (playing) 162 (games),” Cora said. “We’ve been able to do our thing with a lot of guys down, just like other teams have, but we’re comfortable with these kids coming in and throwing. We are. Today was fair – we were short in the bullpen, and had to try and get 15 outs from him. It just didn’t happen.

Seabold wasn’t so bad. He had 21 jumps and misses, the most by any Red Sox starter this season. While their rotation was a strength, they had previously only had eight starts with 14+ flushes, six of which were by Nathan Eovaldi. By that measure, Seabold’s second league start was promising and a huge improvement on last year’s debut, when the White Sox missed just twice. His fastball was effective in the area and his change was great.

But when Seabold was hit on Monday, he was hit hard. He allowed six of the game’s seven hardest-hit balls (each by a different Blue Jays hitter, and each over 104 mph off the bat). George Springer and Vladimir Guerrero Jr. each took it away from sliders in the third inning, then Chapman delivered the final drop on a fastball in the fifth. The seven points were charged to Seabold. It seems possible, if not probable, that the Red Sox will send him for a new arm on Tuesday.

“I made too many mistakes,” Seabold said. “The first few runs I was able to limit it, for the most part. … Then, (in the) fifth inning, I was out of gas, I started making more mistakes and they started taking advantage of that.

It wasn’t a fair fight against Blue Jays starter Kevin Gausman, who topped the Red Sox for the third time this season. He pitched seven scoreless innings with 10 strikeouts, giving him 27 strikeouts and a .43 ERA against the Sox this year. The Red Sox could use a few outings like that, but Eovaldi, Chris Sale, Garrett Whitlock, Matt Barnes and Josh Taylor — all believed to be key pitching personnel — are on the disabled list, and Tanner Houck won’t. is not available because he is not vaccinated and therefore ineligible to play in Canada.


Reliever Tanner Houck, who became the de facto closest, is unavailable for the Toronto series due to his vaccine status. (Justin K. Aller/Getty Images)

The Red Sox have put things back together thanks in large part to calls from John Schreiber, Ryan Brasier and Josh Winckowski, but their pitching squad isn’t complete and they’re on course to end the first half playing 13 of their next 16 games against the Blue Jays, Rays and Yankees. They need reinforcements as soon as possible, although not everyone will be ready right away.

• Sale’s rehabilitation mission moves to Double-A Portland on Thursday. He had six strikeouts in 2 2/3 innings last time out at the minor league complex in Florida, so a jump to Double A is significant.

• Whitlock started a bullpen on Monday and is expected to start another on Friday. He’ll also likely be doing some on-court drills, which Cora described as “the most important thing” considering he’s recovering from a hip injury.

• Eovaldi missed on Monday and is expected to start a bullpen on Wednesday, but has already taken longer than expected to recover from a lower back injury that kept him out for almost three weeks.

• Barnes also threw a bullpen on Monday, but he wasn’t good even before his right shoulder inflammation. The Red Sox need to get him back not only healthy, but significantly better than he was in the first two months of the season.

• Taylor will attend rehab with Sale in Portland this week. He’s already made seven Triple A rehab appearances, and when he’s deemed ready, the Red Sox will have to decide if they want to carry four left-handed relievers. “Let’s get it healthy, and the front office will do what it does,” Cora said.

• Houck should be back when the team travels to Chicago on Friday.

Seabold showed flashes of promise, but he couldn’t give the Red Sox everything they needed — not against the Blue Jays roster. And it was Boston’s secondary relievers who finished the game once it got hopeless. Throwing depth has supported the Red Sox this season, but the division is tight and there are only a limited number of wildcard spots to go.

Cora said he “not really” feels the tension of a shorthanded staff, but there’s no doubt his team’s shooting could improve. And a game like Monday showed the Red Sox would need it.

The earliest would be best.