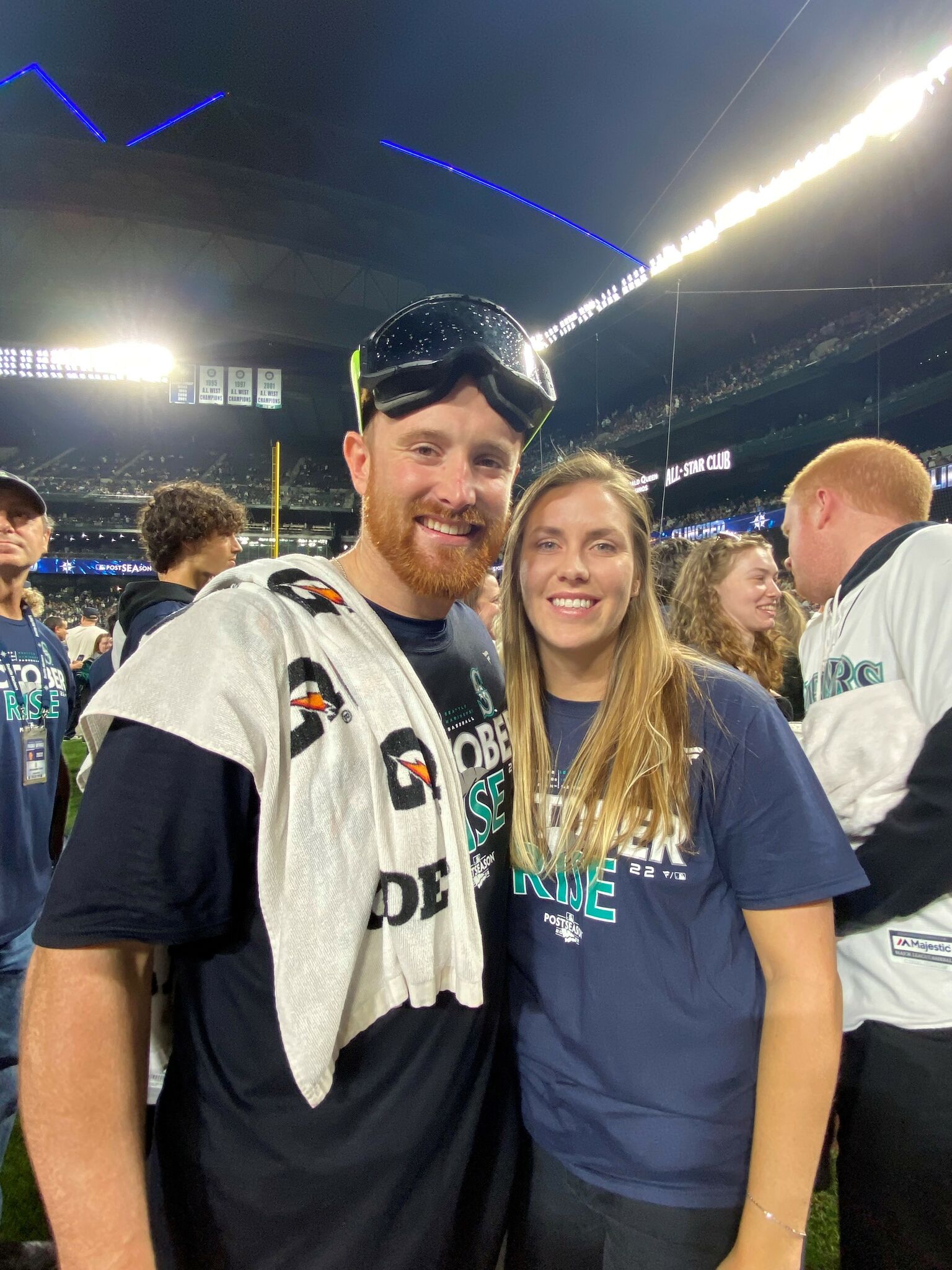 Colonie’s Susan O’Keefe watched her son achieve his childhood dream this weekend. The family’s story is undoubtedly one of the most touching sports stories from the Capital Region in 2022.

When Brian O’Keefe got his first major league hit after eight years in minor league baseball, many of the 42,512 spectators at Seattle Mariners’ T-Mobile Park gave the 29-year-old a standing ovation. His teammates in the dugout also broke into cheers.

And the tears started to flow.

“You know they say there are no tears in baseball. Yes there are, for mom there are tears of joy,” O’Keefe said after Saturday’s game. “It was just amazing to see your child’s dream come true. My heart was racing, I had tears in my eyes, we all cried. I can’t even describe it.”

Susan O’Keefe and I met as CBA moms in 2012. Her youngest son, Christopher, was a year younger than mine, and they played hockey together for the Brothers. At the time, Brian was at St. Joseph’s University in Philadelphia, where he was playing Division I baseball after a stellar career at Colonie High.

Throughout Brian’s life, Susan said she always knew his love of baseball and his desire to excel was something unique.

When he was young, Brian would beg her to come out and hit baseballs at him. She slammed endless grounders and pop flies when her brother Christopher was unavailable and her husband Jack was traveling as a Division IAA football official. He started playing at the age of 4 in Westland Hills.

“I had bruises all over me,” she laughed. “Even as a kid before high school he had a Little League game and maybe didn’t have a big game in mind…he would come home and we had a net set up in our basement and he was hitting the tee…hundreds and hundreds of balls to improve his swing.

His first hit in the majors was a solid liner that landed in front of left fielder for a single.

The weekend was a whirlwind. At 2 a.m. Friday, Jack’s cell phone rang. The initial fear that something was wrong with one of their children was quickly replaced by joy. Brian told them he had been called in to replace one of the team’s receivers, who was going on paternity leave.

O’Keefe played on the West Coast at Triple-A Tacoma and was in the minor leagues for eight years after being drafted in the seventh round by the Cardinals in 2014. After spending five seasons in the St. Louis system, O’ Keefe joined the Mariners farming system. Now at the top level of the minor leagues, he went to work behind home plate just 30 miles from the big league park. So close and yet so far after many years of solid play, overcoming injury, illness and disappointment.

The Mariners cautioned the right-handed receiver in early September. She was told a call could take place at any time, given the uncertain timing of the delivery.

Personal matters – including a wedding shower in Albany with his fiancée’s family – are expected to be put aside when the call goes official. But it’s not always easy. A wedding shower for Emily, Brian’s fiancée, was already in the works.

“He called us two weeks ago and said you might not be able to shower Emily. I thought what am I going to do with all these people if we get the call? But we showered last weekend and everything was fine,” she said.

Emily and Brian met in St. Joe’s and lived in the Philadelphia area for many years. The couple just bought a house in Raleigh, North Carolina and plan to get married in November.

The O’Keefes didn’t get much sleep after the call, arranging for travel and caring for their dog. They booked a flight from Albany at 12:30 p.m. and after connecting in Detroit, arrived on the West Coast at 5:30 p.m. Seattle time.

They dumped their bags and headed to the ballpark from their downtown hotel. They arrived a little late for Friday night’s game, but the timing for the rest of the weekend was impeccable.

That night, the Mariners landed the team’s first playoff birth in 20 years when pinch hitter Cal Raleigh hit a base hit in the bottom of the ninth, sparking a wild celebration.

“Families have been allowed on the pitch with the team. When the players came out of the locker room, let me tell you, they were soaked in champagne,” O’Keefe said.

The Mariners – still wearing goggles draped around their necks – ran around the field, hugging family members and clapping fans’ hands. Group photos were taken with the families; snapped selfies with fans. The night ended with a fireworks display.

That’s when they learned that Brian would get his first Major League start as the team’s designated hitter the next day. They crashed into the hotel after midnight Pacific time, ending a 24-hour whirlwind they will always cherish.

Drained from the trip and the excitement of Friday, there was no time to rest. Saturday was a 1 p.m. departure and their son Christopher was flying in. Christopher, who works in the cruise industry, was in the middle of a two-week golf vacation in Phoenix with three other ABC graduates.

MLB Network zoomed in on the family seated near the field as Brian took his turn in the batter’s box. A questionable third strike call ended his first at bat. He left no stone unturned on his second at bat, jumping on a first pitch fastball.

“I’ve had so many people contact me. Brian must have turned off his phone. Have the support and love of loved ones, family and friends. It’s just great,” O’Keefe said. “He is so happy that we are delighted. Just to see your child’s dream they’ve worked so hard for for so long. It’s indescribable.

Post-season MLB shirts feature the phrase “October Rise” and Susan is pictured wearing one in a family photo in the tunnel outside the team’s locker room. For the O’Keefe family, the climb took them all the way to Cloud 9.