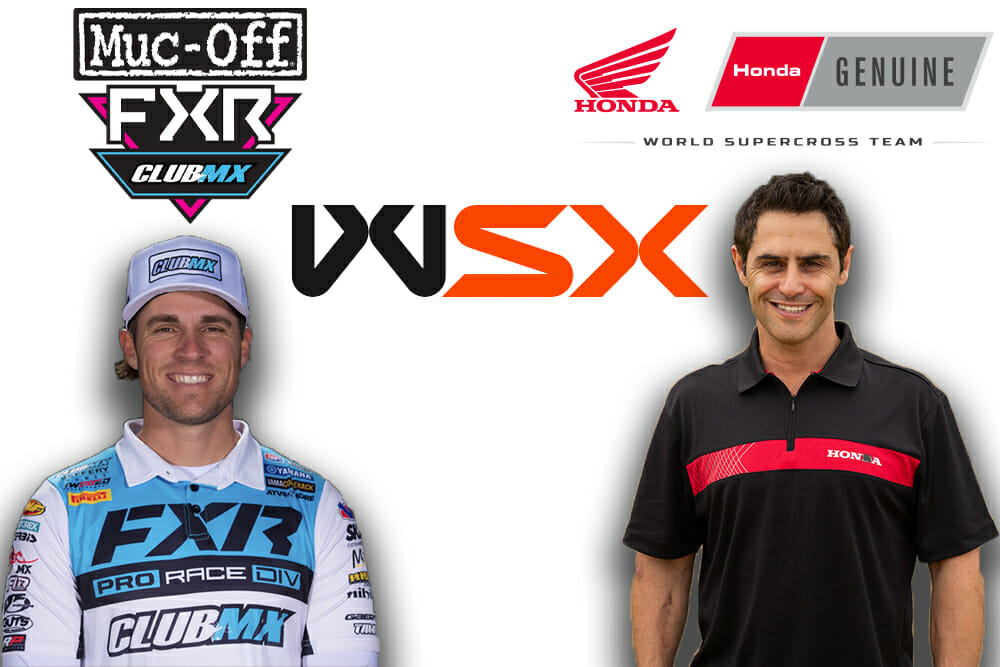 Two new teams have been added to the World Supercross paddock, occupying eighth and ninth of ten available spots. Genuine Honda Racing and ClubMX Yamaha cemented their place in the WSX world after their announcement today. Genuine Honda is the Australian factory Honda effort that made a name for itself in the United States as the FirePower Honda Team. They’ve had success with riders like Jordon Smith, Justin Brayton and now Max Anstie. With the announcement of Ken Roczen running the series, we are curious if he will be riding under this new Honda tent. The ClubMX team is also a US based team with riders like Alex Martin, Garrett Marchbanks, Enzo Lopez, etc. We know that Jeremy Martin is also signed up to ride for their team next year, but we don’t know which series he will race in.

SX Global, the Australian sports and entertainment company leading the FIM Supercross World Championship (WSX), today announced the addition of two additional teams to its lineup of 10 exclusive team licenses for its championship. World Championship which kicks off on Saturday October 8 in Cardiff, Wales at the Principality Stadium, including Honda Genuine Honda Racing and Muc-Off/FXR/ClubMX. These two established Australian and American motocross and supercross veterans provide the WSX with a deeper team base in key markets, setting the stage for a successful rider season.

An incredibly rich history in Australian and American Supercross, Yarrive Konsky’s career with Honda spans two decades. The highly competitive squad and stable of experienced riders have won the last four Australian Supercross Championships, making them an ideal team for the FIM Supercross World Championship. Based at the Millsaps Training Center in the United States, the team is led by former racing star Martin Davalos, who competed at the highest level in American Supercross and motocross, with seven victories to his name. The prominent Ecuadorian leads the day-to-day operations of the US racing program and will oversee the team’s growth on the world stage.

ClubMX owner Brandon Haas has transformed his Minnesota backyard project into one of the most respected training centers in the world. A former professional rider, Haas opened ClubMX to provide riders with everything they need to hone their craft with a state-of-the-art, year-round training facility, including our motocross tracks, four supercross tracks and a full team of riding coaches, fitness trainers, full-time nutritionist and chef, physiologist, orthopedist and track team. In 2018, Haas partnered with Scott Jeffery, a builder and businessman with a successful history in Canadian motocross, to start the ClubMX professional racing team, which has grown into a well-established and well-regarded program competing in supercross and motocross.

“With the addition of Honda Genuine Honda Racing, which brings a unique combination of success in American and international competition, and Muc-Off/FXR/ClubMX, which has an established Supercross team in the United States with state of the art he training center at the WSX Championship continues to build a rock-solid foundation of experienced and competitive teams for this World Championship,” said Adam Bailey, Director – Motorsport of SX Global. “From day one, our priority has been to deliver the highest levels of sophistication, talent and competition for this championship, and these two licensed teams deliver on that promise in spades.”

SX Global will finalize and announce the final licensed team for the WSX Championship in the coming weeks. Additionally, the WSX has announced that superstar Ken Roczen will compete in the championship, who will battle Eli Tomac as the Wildcard entry to the British Grand Prix at the Principality Stadium in Cardiff, while riders who will compete in the WSX championship will be announced in the next few weeks.