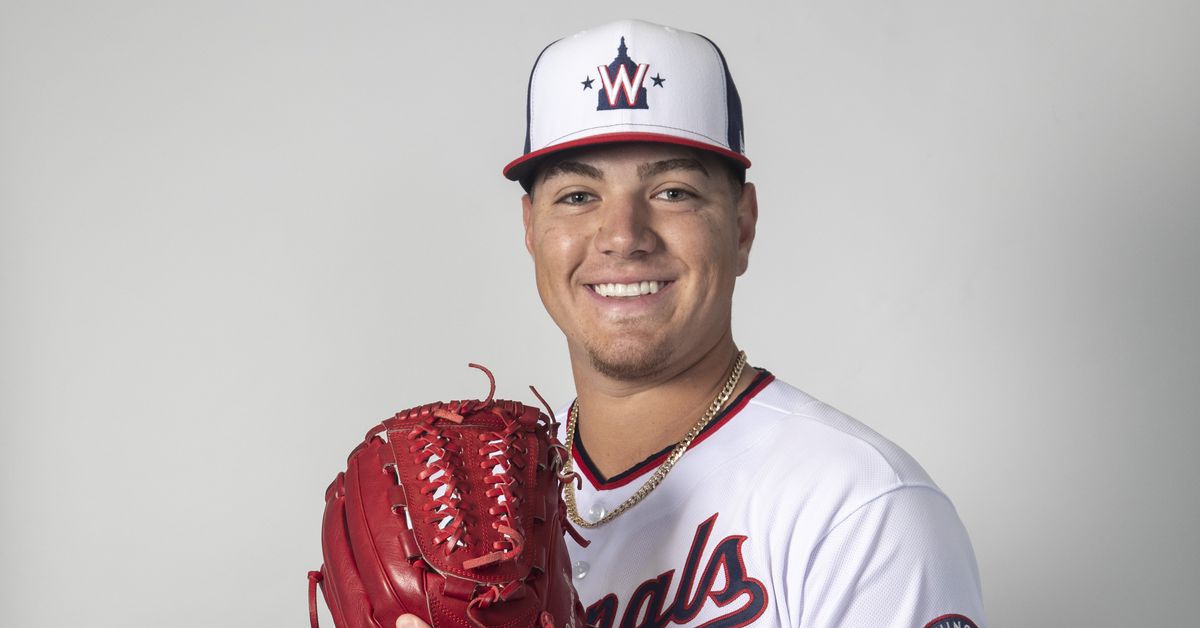 Cade Cavalli, 23, and the Washington Nationals’ first pick in the 2020 draft (22nd overall in the 1st round), spent his first year as a professional pitching at the club’s alternate training site in Fredericksburg, Va., with no minor league season for the players that year during the COVID pandemic.

Ranked No. 1 on MLB Pipeline’s organization’s top prospects list through 2022, Cavalli is set to make the leap to the majors, but as GM Mike Rizzo said when he spoke to reporters last weekend from Spring Training in West Palm Beach, FL, the right-hander will let the club know when he’s ready to take the next step.

“Cade will let us know when he’s ready to pitch in the big leagues, I think,” Rizzo said.

“He’s got electric stuff, he’s got an elite package, we know that, he just needs to polish it up a bit. And the pace of that is up to him. He’s an extremely hard worker, and he has to go for it. at his own pace, but he’s going to let us know by his performance when he’s ready, and as always, what we’ve done here with myself as GM, when he’s ready, he’s gonna be here.

Nationals coach Davey Martinez spoke this weekend about the advice he gave Cavalli this spring as the right-hander prepares for his second pro season.

“He’s a competitor,” Martinez said in his pregame press conference with reporters on Friday.

“And I had good conversations with him. He understands what he must do. The good thing is he got [123 1/3] innings last year, and he learned a lot, and he knows he’s going to throw strikes. The most important thing for him, as we tell all our young people and even our veterans: if you can’t throw the ball regularly over home plate, the difficulties are going to be great for you. Especially when you get here and the hitters are so much better, I think, because they have a good eye.

“So he’s – when I look at him, he’s been 0-2 on a lot of hitters, he’s always got this little thing about hitting guys and burying pitches, and I said, ‘No’ , I said, ‘…some of the best pitchers I’ve known attack the strike zone, they got batters out on three pitches or less, they were in the fifth, sixth inning with 70 pitches.

“I said, ‘With your stuff, I think you can be one of those guys, really.

“There’s a point where you can overpower someone, but it’s just about throwing punches, and consistently.

What has Martinez seen in Cavalli so far that leads him to call the young star a contender, or what is his definition of the word in this context? What stands out?

Martinez was asked what he says to young pitchers these days, strikeouts don’t carry the stigma they had in other days, about the value of getting quick outs versus stacking. some Ks, with a pitcher like Cavalli, in particular, able to pull batters back, but it might be better to try a different approach, like pitching on contact to keep his count down and allow him to go deeper in plays.

“What we told him is that your stuff is really good,” Martinez explained. “I mean, he’s 97-98, he’s got a really good break point, a really good change, I said, there’s not much more you need to put in there, except share the fact – throw strikes. You want hitters to hit, swing, consistently.

“You talk about – I played with Randy Johnson. I’ve known Randy for a long time. He would be the first to tell you, “I wasn’t up there trying to eliminate everyone. Just because my stuff was good, I knocked the guys out,” but he used to be – as you know, he used to get really pissed off when his pitch count was high. He wanted guys to swing the bat, and he knew sometimes he’d be a little erratic, and that would really piss him off, because he said, ‘I just wanted to hit some bats and let the guys swing.’ I heard that from a lot of guys, a lot of Hall of Famers, so that’s the kind of intentions we want these guys to throw [with].

Cavalli made his 2022 Grapefruit League debut in Sunday’s game against the Houston Astros. How did it go?

Cade Cavalli just hit the side in dominant fashion. The Astros didn’t even start the game with any starters, so they’re mostly minor leaguers not close to the big league, but still. Impressive.

Two more strikeouts for Cade Cavalli in his second inning of work. Gave up a double on the first pitch just inside the otherwise dominated 1B line. 2 IP, 1 H, 0 R, 0 BB, 5 K, 30 throws, 21 strikes. (And yes, the batters he faced wore jersey numbers between 73 and 95.)