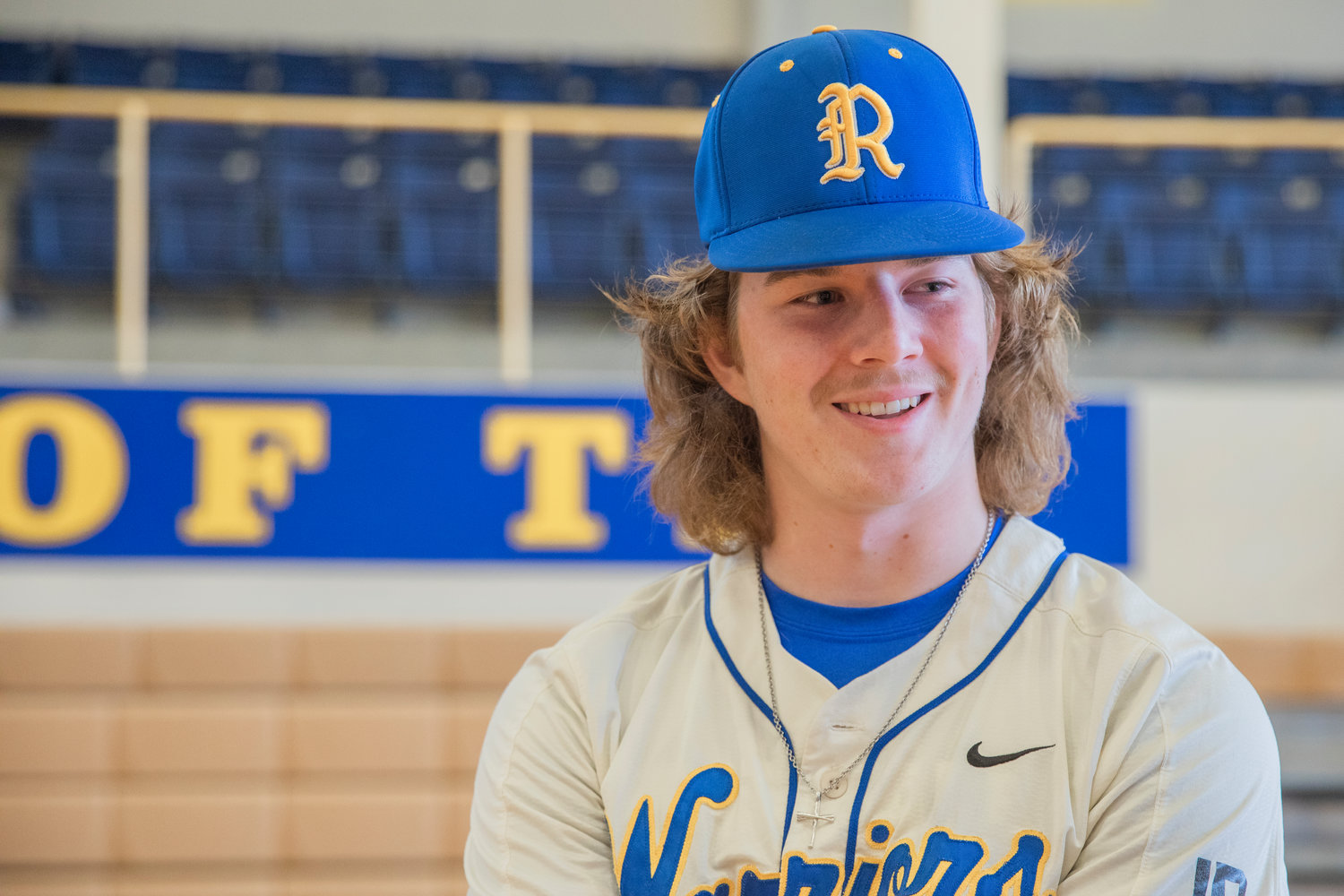 When the lights shone the brightest, All Region MVP Braden Hartley produced

By The Staff of The Chronicle

Few pitchers can say they faced two of the top three teams in the state and dominated offensively and defensively.

During the year, Hartley pitched 42 ⅔ innings in eight starts, with a 1.15 ERA, 78 strikeouts, and only seven earned runs allowed. At plate, the junior batted for a .414 batting average with 22 runs scored, .580 on-base percentage, .621 hitting percentage and 10 doubles.

But when it mattered most, when Hartley was playing against 2A state champion Tumwater or third league runner-up WF West, he played his best ball.

Against those two teams, Hartley pitched a total of 12 ⅔ innings, allowing only three hits, no earned runs, and striking out 25 batters. His numbers helped the Warriors sweep the Bearcats in a huge late-season streak in the spring.

For Hartley, something was just different in those games.

“They are the best dogs in our league, it amplifies the atmosphere of the game,” he said. “It makes you really competitive.”

After a rocky start to the season for the Warriors, which saw them drop some streaks they could have won, Rochester needed streak wins just about every game.

Although several players came to life for the Warriors when it mattered, Hartley was at the center of it all.

“He always seemed to rise from the occasion when it mattered,” Warriors coach Brad Quarnstrom said. “He gets up for these games. You can see the competitive advantage coming out of it. In this match against Chehalis, he showed more courage and tenacity than I had seen in a long time.

His trainer said what separated Hartley from the rest of his competition was his intelligence. Although the junior spent tons of time in the offseason with his summer league team and in the weight room, his calm, analytical demeanor helped him mow down batters all season.

“It’s his intelligence,” Quarnstrom said. “He picks up on little things during an at-bat and adapts. He’s a very calm, humble guy. He always pays attention to the little things around him.

And after all was said and done, despite the Warriors only missing one game of the district playoffs in a playoff last spring, Hartley garnered a ton of respect from his fellow coaches. around the 2A Evergreen Conference. WF West coach Bryan Bullock said he was one of the best pitchers he had seen in the state after the Bearcats were swept by the Warriors, and Hartley won a first team all league honors after districts.

Upon earning MVP honors, Hartley said he was honored to be recognized in the room full of talent on The Chronicle’s versatile team.

“It means a lot,” Hartley said. “All these guys are really tough here. It is a great accomplishment and I am grateful for it. »

Along with Hartley, 14 other players from Lewis and South Thurston counties were selected to The Chronicle’s baseball team this spring. Read the full list below.

One of the Bearcats’ most consistent hitters and infielders, Bunker batted .323 with 27 runs scored and 15 RBI, helping WF West to a third-place trophy after a strong season.

In the infield, Bunker had a .912 save percentage with 50 assists, four double plays and just eight errors in 27 games.

Chapman led the Tigers with an average of .521 in 77 plate appearances, with 20 RBI, 32 runs scored and one homer to his name. Chapman was instrumental in a strong district run that saw Napavine earn a first-place trophy and a state bid, earning a first-team full C2BL honors.

One of the top catchers in his league, Demarest had a .983 field percentage on 118 chances, rarely committing an error, while averaging .372 at the plate with 22 runs scored, 25 RBIs and 10 doubles.

Demarest also assisted on the mound, pitching 35 innings with just 18 earned runs, 29 strikeouts and a 3.60 ERA.

Fugate committed just four errors in 27 games, proving to be one of the best infielders and bats in a strong league.

After a slow start, Groninger had another strong season as a senior, batting for .328 with 11 runs scored and 14 RBI.

On the mound, Groninger had a 3.36 ERA with 14 strikeouts in 16 ⅔ innings. The Elder Warrior will bring his talents to Centralia College next spring on the diamond.

Helping the Riverhawks to a third-place finish in the league, Gilreath was one of the best batsmen on his roster, batting for a .382 batting average with 22 RBI, 23 runs scored, one homer and 11 doubles.

Another strong Warrior senior, Hawes hit for a .357 batting average with 23 runs scored and 11 RBI at the plate, while also shooting .923 fielding percentage, making four double plays and racking up 33 assists at the shortstop.

Hawes earned a first team full 2A EvCo honors for his efforts.

About as hard as a bat you’ll find in Tier 2B, Keaton raked for the Titans, batting for a .554 batting average with two home runs, 36 RBIs, 36 runs scored and 16 stolen bases.

Keaton wasn’t too shabby on the mound either, earning a 2.35 ERA with 61 strikeouts in 41 ⅔ innings.

After a strong season with the Loggers, Larson earned a first-team C2BL full honor, pitching 43 ⅔ innings with a 2.88 ERA, 59 strikeouts and just eight walks as one of the most accurate pitchers in the county. of Lewis.

Larson was also a stallion at the plate, batting for an average of .294 with 17 runs scored.

The Bearcats’ most consistent pitcher and hitter, Moore was a workaholic on the mound, pitching 59 innings with 82 strikeouts, going 8-3 and having a 1.78 ERA.

At plate, Moore smashed four homers with 28 runs scored and 26 RBI, helping him earn a first-team 2A EvCo all-honor.

No stranger to teams in all regions, Parker batted for a .391 batting average with 10 doubles, 14 RBIs and 29 runs scored for the Tigers this season.

Throwing the most innings for Napavine, Parker had a 3.69 ERA in 43 ⅔ innings with 38 strikeouts. Parker also had a perfect fielding percentage on 51 total chances at pitching and catcher.

The Pirates’ ace all season, Percival had a ridiculous 0.66 ERA in 32 innings pitched, with 64 strikeouts and 26 walks, and just three earned runs against him all year.

Percival also batted for a .650 batting average with 6 RBIs.

Leading the Riverhawks on the mound all year, Schultz went 4-2 with a 2.40 ERA, pitching 46 ⅔ innings, allowing just 16 earned runs with 88 strikeouts.

Helping the Beavers to a solid rebounding season, Strawn was 4-0 in his mound starts, with a 2.60 ERA over 39 innings pitched with 44 strikeouts.

At plate, Strawn hit .403 with nine doubles and a home run, earning him a first team 1A Evergreen All-Honors and helping the Beavers finish second in the league.