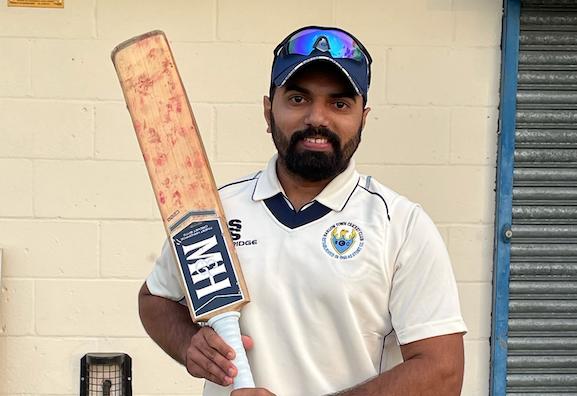 A BLISTERING 151 from Adi Shukla was not enough to stop Harlow Town 1st XI drawing with Upminster in a thrilling match at Ash Tree Field. Skipper Ronnie Yates won the toss and opted to bat first in the midday sun. Opener Dan Baldwin fell early for 7 and Connor Teale quickly called for 10. Pat Yates came next and with Shukla put 188 for 4and wicket allowing Town to take control of the game. Shukla hitting with relative ease is a joy to watch with the ball disappearing all over the pitch with some big 4s and huge 6s, Shukla quickly reached his first century for Harlow Town, followed in fast double time by his 150.

Unfortunately for Town, Shukla and Yates (42) fell in consecutive balls, but Shaun Alderson (13), Nabeel Akhtar (13 not out) and Tom Wilcox (3 not out) led Harlow Town to a 256-5 scoreline of their sleeves. .

Given the conditions, 256 would only be considered a normal score, so Town would need to play and play well to win the game. While Town’s lineup was good, Harlow Town’s bowling offense will surely see better days, combined with poor bowling lines and a fast outfield, the opposing team’s batters capable of scoring with a relative ease, only Akhtar (34-4 from 9 overs) and Simon Rowell (38-2 from 7 overs) achieve much success with the ball. The game came down to the last pitch of the innings with Upminster needing 2 for the win, the batters attempted to run 2 but were only successful with the first inning and were run out for the second. Harlow Town’s other wickets were shared by Sam Wilson and Shukla. Upminster finishing on 256-9 and the match ending in a draw.

The 3rd XI were due to start their league campaign but the opposition were unable to field a team so a friendly test was arranged against a young Shenfield side consisting of a mix of 2, 3 and 4. Skipper James Williamson has lost the toss and Shenfield elected to strike. Shenfield’s team audibly declaring that they would score at least 250 runs and win the game easily inspired early aggression in the bowling alley and the city field. As the aggression kept the run rate low, Shenfield’s opening batsmen looked set, but a change of bowling proved successful as three wickets fell quickly with 2 wickets for John Rogan (36-2 from 6 overs) and 1 for Luke Luckin (35 -1 on 8 overs). The rest of the overs were split around the team, Sarang Kanakan (27-1 from 8), Kishore Kumar (46-1 from 8), Adam Stott (8-0 from 3), Alex Manning (10-1 from 3) and Ashley Norcott (27-1 of 4) with Shenfield finishing on 192-7.

In response Town didn’t get off to the best start, after their match winning antics last week Paul Smith was out for 2, debutant Ash Kumar was unbelievably unlucky to be out for 1 caught sliding after deflecting the defender at the ravine. Now in the ascendancy, the visiting team struck out opener Dan Dewey for 17, while captain Williamson quickly called for 3 runs. With Alex Manning and Ashley Norcott at the crease, Town rebuilt themselves and quickly gave themselves something of a platform to build on. Manning eventually fell for a well-deserved 38, Rogan made a 17-point appearance while supporting Norcott. Stott (5) and Kishore Kumar (5) both backed Norcott to reach his 50. In the end, the overs ran out, with Norcott finishing 50 and Karang 4 for a total of 174-8.

Even though the team ultimately lost by 18 points, skipper Williamson was pleased with the performance against a much higher side in the league system, and if the core team can be maintained Town should have a season successful after his promotion last year. .

The 3rd XI hosts (at Ash Tree Field) Matching Green 2n/a XI this weekend with the game starting at 1pm, again all spectators are welcome.

Town of Harlow 2n/a XI travels to Stanford Le Hope for his first action of the season.